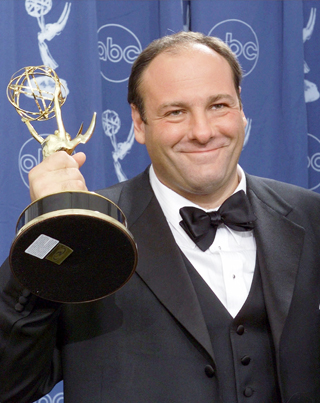 LOS ANGELES - James Gandolfini, whose portrayal of a brutal, emotionally fragile mob boss in HBO’s “The Sopranos” helped create one of TV’s greatest drama series and turned the mobster stereotype on its head, died Wednesday in Italy. He was 51.

Gandolfini died while on holiday in Rome, the cable channel and Gandolfini’s managers Mark Armstrong and Nancy Sanders said in a joint statement. No cause of death was given.

“He was a genius,” said “Sopranos” creator David Chase. “Anyone who saw him even in the smallest of his performances knows that. He is one of the greatest actors of this or any time. A great deal of that genius resided in those sad eyes. I remember telling him many times, ‘You don’t get it. You’re like Mozart.’ There would be silence at the other end of the phone.”

Gandolfini played mob boss Tony Soprano in the groundbreaking series that aired from 1999 to 2007. His performance was indelible and career-making, but he refused to be stereotyped in other roles as the bulky mobster who was a therapy patient, family man and cold-blooded killer. He won three Emmy Awards for the role.

HBO called the actor a “special man, a great talent, but more importantly a gentle and loving person who treated everyone, no matter their title or position, with equal respect.” The channel expressed sympathy for his wife and children.

“I had the greatest sparring partner in the world, I had Muhammad Ali,” said Lorraine Bracco, who, as Tony’s psychiatrist Dr. Melfi in “The Sopranos,” went one-on-one with Gandolfini in their penetrating therapy scenes. “He cares [about] what he does, and does it extremely well.”

After the series concluded with a breathtaking ending that left viewers guessing, Gandolfini’s varied film work included the Osama bin Laden hunt docudrama “Zero Dark Thirty” and comedies such as “In the Loop,” a political satire. He voiced the Wild Thing Carol in “Where the Wild Things Are.” And in the crime flick “Killing Them Softly,” he played an aged, washed-up hit man.

Gandolfini also shared a Broadway stage in 2009 with Jeff Daniels, Hope Davis and Marcia Gay Harden in a celebrated production of “God of Carnage,” where he earned a Tony Award nomination for best actor. He also was in “On the Waterfront” with David Morse.

In a December interview with The Associated Press, a rare chat for the star who avoided the spotlight, Gandolfini said he gravitated to acting as a release, a way to get rid of anger. “I don’t know what exactly I was angry about,” he said.

While Tony Soprano was a larger-than-life figure, Gandolfini was exceptionally modest and obsessive.

He grew up in New Jersey, the son of a building maintenance chief and a school cafeteria worker. After earning a degree in communications, Gandolfini moved to New York City, where he worked as a bartender, bouncer and nightclub manager. When he was 25, he joined a friend of a friend in an acting class, which he continued for several years.

Gandolfini’s first big break was a Broadway production of “A Streetcar Named Desire” where he played Steve, one of Stanley Kowalski’s poker buddies. His film debut was in Sidney Lumet’s “A Stranger Among Us” in 1992.

Director Tony Scott once praised Gandolfini’s talent for fusing violence with charisma, calling him “a unique combination of charming and dangerous.”

It was “True Romance” that piqued the interest of “Sopranos” creator Chase.

Gandolfini later produced a pair documentaries for HBO focused on a cause he held dear: veterans’ affairs. “Alive Day Memories: Home from Iraq” in 2007 profiled 10 soldiers and Marines who waged personal battles long after their military service had ended. Four years later, “Wartorn: 1861-2010” charted victims of post-traumatic stress disorder from the U.S. invasion of Iraq all the way back to the Civil War.

“Do I think a documentary is going to change the world?” Gandolfini said with characteristic modesty during an interview about the second film. “No, but I think there will be individuals who will learn things from it, so that’s enough.’’ AP