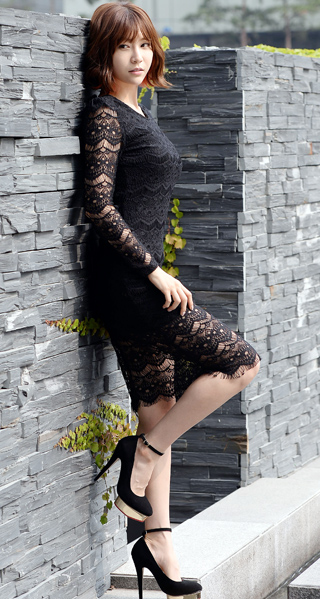 Gu Ji-sung hopes that her cinematic debut in “The Puppet” will lead to a successful transition from racing model to actress.

As the weather warms up, horror movies are back on the big screen and this summer’s lineup promises to leave viewers squirming and drenched in sweat. There is something for the whole family, from teens to those who like their entertainment a little more risque.

The summer horror season really got its start yesterday with the release of two highly anticipated thrillers. “The Puppet” and “Doctor,” both rated 19, have newbie actresses as leads and put a lot of flesh on display in between the slashing.

“Doctor” stars Bae So-eun, who takes the lead for the first time in a revenge plot that pits a plastic surgeon against his cheating wife and her boyfriend.

As imaginable, there is romp and gore aplenty, the latter being executed by the expert surgeon himself with his trusty tools of the trade.

“The Puppet” is about a doctor who blurs the line between professionalism and personal interest by putting a patient, who is also a friend’s girlfriend, under his spell during a hypnosis session. The female lead is played by racing model-turned-actress Gu Ji-sung, who no doubt already has a large fan base of motor heads to secure ticket sales.

There is nudity, both on Gu’s part and the male lead Lee Jong-su, who plays the sly psychiatrist.

Film critic Jason Bechervaise said that selling sex and violence as a package is a clever and successful trick often deployed by filmmakers.

“Some Korean horror films like ‘Memento Mori’ have explored areas of sexuality in the past, but combining eroticism and horror in films such as ‘The Puppet’ and ‘Doctor’ appears to be a trait unique to some of this year’s horror movies.”

Bechervaise added that although he wasn’t sure how successful the outcome would be, “it’s no doubt an attempt to attract older audiences in what promises to be a competitive month for horror films.”

“Doctor” (left) and “The Puppet” promise to leave viewers wanting more during the hot nights ahead.

Ahead of her debut, Gu took the time to explain her controversial role and other elements of her career.

Q. How did the transition from modeling to acting happen for you?

A. I made my official modeling debut in 2009 and after being active as a racing model, I got a lot of offers for other stuff, mostly entertainment shows. Those programs were a lot of fun, so I took part, but it took me a while to try serious acting.

I never thought I could hack it as an actress, so when agencies asked me to take part, I always declined. But then somehow I managed to take part in the drama “Dae Mul” [2010]. It turned out to be the best thing for me; to live in someone else’s skin was so much fun.

Was it easy to break into acting given your celebratory status as a model?

To a certain degree, but I wanted to break away from the mold that’s got racing models trapped. Sure, modeling is acting, but it’s only with the eyes. Acting involves words, motions and such.

How did you prepare for your role in the film?

When I decided to pursue acting, I began taking acting lessons. But then I started feeling like I was becoming a robot. It was too scripted, predictable. I thought acting should be natural; it’s telling a tale of people. So then I began practicing by myself, taking lessons on and off. I didn’t want to act in the typical way, as if following a rule.

How did you get cast as the lead?

When I got handed the script by my agency, I said no. It seemed too ambitious for a debut role. Also because of the nudity factor, I was hesitant, but then my mom said that it was a character that I’d be taking on, not exactly revealing myself.

She said I wasn’t fit to be an actress, and after thinking about what she said, I decided mum was right. I didn’t think I’d improve by just practicing acting on my own, so I took on the part and saw it as training.

It must have been difficult to fuse sex appeal and horror together. Could you relate to the character at all?

With models, there is this stereotype that comes with it because the public already sees you in a certain light. It’s hard to break away from that image. Although people see me as this sexy vixen, I’m not like that. I’m very tomboyish. And this [character] is a doll designer who is very feminine and girly - the total opposite of me.

But she also has this dark side when under hypnosis, and this sexy ghost takes over. Then toward the end, she becomes this lunatic, and it was a hard job trying to act out three distinct roles like that. You don’t meet someone with three personalities everyday.

Filming’s over. Are you having any problems returning to reality?

Filming finished in January and afterward, as well as putting on weight, I was really down for no reason. I had paralyzing nightmares, saw a ghost and had a really hard time. I’d be lying down and then there would be this ghost laughing at me. I called on every deity known to mankind to get me through.