Allies agree to tougher demands on the North

Allies agree to tougher demands on the North 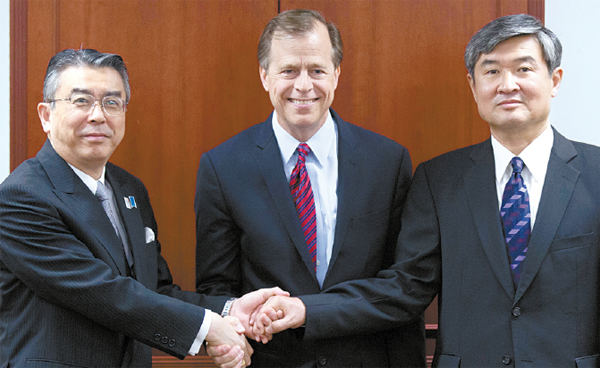 Negotiators from South Korea, the United States and Japan have reached a consensus to impose tougher obligations on North Korea in return for restarting talks with the regime, including a “verifiable denuclearization” of the country.

“Although it’s hard to divulge details on the negotiations, I am revealing parts [of the agreement],” Cho said at a press briefing after the talks. “We should impose far stronger obligations [on North Korea] than those from the Feb. 29 North Korea-U.S. agreement.”

In an agreement between Washington and Pyongyang in February 2012, North Korea promised to suspend uranium enrichment at its facility in Yongbyon for the first time in exchange for 300,000 metric tons of food aid from the United States. The agreement was nullified after North Korea launched a long-range rocket in April 2012.

“We reaffirmed our commitment to the Sep. 19, 2005 Joint Statement of the six-party talks, including its core goal of the verifiable denuclearization of the Korean Peninsula in a peaceful manner,” a spokesperson of the U.S. Department of State said in a media brief released on Wednesday.

In a joint statement adopted at the six-party talks on Sep. 19, 2005, Pyongyang promised to return to the Nuclear Non-Proliferation Treaty and allow inspectors from the International Atomic Energy Agency to monitor its nuclear facilities.

The three allies also confirmed their positions on judging North Korea “by its actions, not its words,” urging Pyongyang to take “meaningful steps” to end its nuclear weapons program.

A continuous engagement with China and Russia was also included in their agreement. Both are members of the so-called six-party talks, which China also hosts.

The meeting also coincided with bilateral talks between Kim Kye-gwan, a top nuclear envoy from North Korea and his counterpart in China, Wang Jiarui, in Beijing on Wednesday.

The Chinese Foreign Ministry’s Web site said Kim reaffirmed North Korea’s willingness to have talks with “concerning countries” regardless of the form of the talks, and called for a “peaceful resolution” in regard to its nuclear weapons programs.

Seoul’s Cho said the allies also agreed that “talks for talks’ sake” are unnecessary, based on their frustration over North Korea’s repeated missile and nuclear tests.