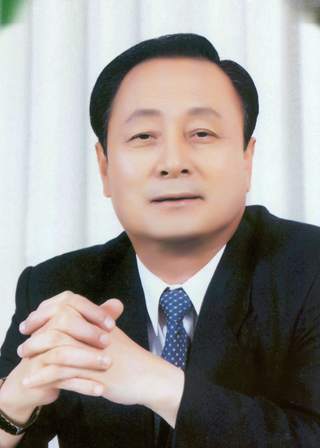 A Suncheon court yesterday sentenced Lee Hong-ha, the infamous founder of Seonam University in Namwon, North Jeolla, and five other higher education institutions in the country, to nine years in prison for embezzling 90.9 billion won ($78.6 million) of school funds.

In handing down the heavy verdict to the 75-year-old disgraced educator, the Suncheon branch of the Gwangju District Court said the defendant had regarded the universities that he founded as his “personal property” and “extorted school funds willingly as he pleased.”

“After building the empire of private education, Lee behaved as if he were a king, pocketing school funds over a long period time,” said the court.

“The heavy punishment is inevitable [given his grave illegal acts] even considering his old age and some contributions made to the schools [founded by Lee].”

Of the 100.4 billion won in embezzlement, for which Lee had been indicted by the prosecutors, the court ruled the troubled educator pocketed 90.9 billion won in school funds.

The court’s verdict on Lee followed the prosecutors’ demand to a court last month to give Lee a 20-year prison term.

The court also delivered verdicts on two presidents of Seonam and Shingyeong universities, who were also indicted on embezzlement charges along with Lee.

The president of Shingyeong University, also founded by Lee, was sentenced to two years in prison with a three-year suspension.

The court said that although the two did not collude with Lee in the embezzlement, they are guilty of not taking any action to stop the founder from embezzling though they were aware of Lee’s illegal acts.

The prosecutors are reportedly planning to appeal the ruling.

Lee was later additionally charged with bribing an audit official at the Ministry of Education with 22 million won in return for receiving audit information in advance.

The official is now behind bars.

Lee’s massive pocketing of school funds has taken a heavy toll on students enrolled at universities founded by Lee, who have been studying under deteriorating school conditions because of a lack of maintenance efforts and investments in education facilities and programs.

Lee also made headlines, aside from the embezzlement charge, earlier this year when he was granted bail from the Suncheon court due to health conditions.

The decision by the court sparked sharp criticism from education and legal circles, prompting the prosecutors to file a bail suspension, a rare move for prosecutors.

The Supreme Court in April accepted the bail suspension request and put Lee back in jail.