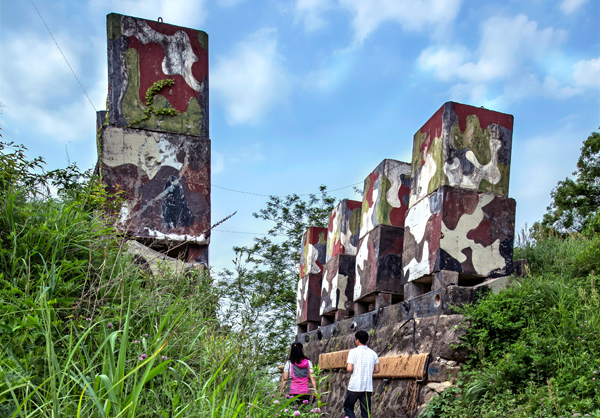 Salted Shrimp Hill is near the Headquarters of the Labor Party. Concrete pillars were built along the hill to prevent enemy forces from entering the region. By Shin Dong-yeon

Cheolwon, a small county in Gangwon Province, is not physically far from Seoul. It’s 90 kilometers (56 miles) away from Seoul City Hall, even closer to Seoul than Cheonan, South Chungcheong. However, many Koreans might feel distant from Cheolwon because the region and its 50,000 residents are located on the front line.

One part of the county belongs to the North and the other belongs to the South, which is a vivid reminder of the fact that Korea has been divided for six decades.

Marking the 60th anniversary of the cease-fire agreement between the South and the North, the JoongAng Ilbo, an affiliate of the Korea JoongAng Daily, recently visited Cheolwon. About 30 percent of Cheolwon, or 71 kilometers, lies on the demilitarized zone, which stretches across 248 kilometers.

Traces of the cold war were found here and there but Cheolwon is now more like a beautiful trekking course that is surrounded by lush green trees and endless pastures.

It used to be impossible for ordinary citizens to get access to the headquarters of the Labor Party that is located within the civilian passage restriction area near the DMZ, but people are now able to reach cold war relics that were once off-limits by car.

Except for a couple of guard posts and signs that warn of the locations of land mines, Cheolwon was tranquil.

“After the June 15-South and North Joint Declaration back in 2000, both countries have stopped broadcasting provocative messages. Ever since then, it has become quieter,” said Kim Yong-soon, 56, a cultural heritage commentator.

By paving roads, creating walking trails and opening restricted areas to tourists, Cheolwon attracted 1.5 million non-Korean tourists to the region last year, according to the Korea Culture and Tourism Institute.

These tourists also looked around Imjingak, a border village some 40 kilometers northwest of Seoul near the DMZ, Panmunjeom, another village on the border, and the Third Tunnel that was designed by the North for hit-and-run raids.

According to the tourism institute, most of those tourists were Chinese, who visited to pay tribute to their fathers and grandfathers who were killed during the Korean War (1950-1953).

Trips to Cheolwon vary depending on where you want to look. Outside the restriction area is accessible anytime. It’s difficult, but not impossible, to access the restricted area. 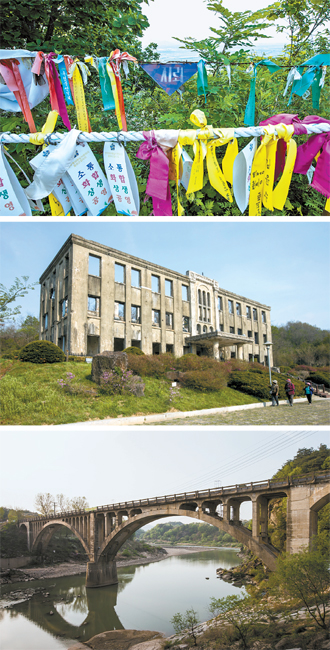 Top: Ribbons wishing for peace on the Korean peninsula are seen on the trail that starts from Mount Soyi. Middle: The Headquarters of the Labor Party is a cold-war relic. Above: Seungil-gyo Bridge was built by the South and the North. By Shin Dong-yeon

Kim, the cultural heritage commentator, said walking is the best way to look around Cheolwon. “This area has remained intact over the past half-century. Naturally, you can run across breathtaking views everywhere. I recommend you to walk through Cheolwon at least half a day.”

There are two walking trails where you can enjoy Cheolwon’s nature to its fullest. One is designated by the Ministry of Security and Public Administration in 2011 and it starts from Mount Soyi Green Path and ends at Land Mine Flower Path, 4.8 kilometers away.

The term “land mine flower” was coined by Poet Jeong Chun-geun, 71, a native to the area. Through his poetry called “Land Mine Flowers,” Jeong named unknown flowers that bloom on minefields as land mine flowers.

The other walking trail was designated by the Ministry of Culture, Sports and Tourism in 2010 and it is called Cheolwon Swae Dullegil. The 19.1-kilometer path follows the circumference of Cheolwon.

The first walking trail that starts from the Mount Soyi Green Path proved nothing is better than nature in Cheolwon.

Diving beetles frolicked in endless paddy fields, red-bellied frogs made their way without being budged by trekkers and white herons elegantly lowered their long necks searching for something to snatch from the middle of the reservoir.

Before the walking path was created, the mountain was considered to be a hazardous area because of ubiquitous land mines. Mines are still buried there but wire fences separate trekkers and the mines.

The first walking path was suitable for summer trekking because of tall and thick trees which perfectly block the strong sun.

Hanyeoul Path starts from Seungil-gyo Bridge and ends at Chilmanam, meaning rocks with 70,000 different shapes. The path allows people to get a glimpse of an extraordinary view of the Hantan River. The walking course also has many stories to tell.

The South and the North built the Seungil-gyo Bridge, even though the two countries didn’t intend to do so.

North Korean soldiers started construction on the bridge but they failed to complete it as they lost Cheolwon to the South. The North did basic construction by building up piers and the South later added the final touches in 1952.

The bridge was named after Park Seung-il, to commemorate the South Korean colonel who reached the 38th parallel for the first time among South Korean soldiers.

Of many spots along Hanyeoul Path, the most beautiful part was from Songdaeso Pond to Uhm Tae-woong Plaza.

The section stretches merely 700 meters but pillar-shaped joints, which were believed to have been formed 270,000 years ago, dazzled trekkers’ eyes. Actor Uhm is a public relations representative of Cheolwon.

The path to Mount Kumgang includes more historical buildings and landmarks. One of them is Cheolwon Police Station, which is next to the Headquarters of the Labor Party. The whole police station building isn’t there anymore, though.

“The police station was constructed with concrete, but Cheolwon citizens demolished it, not because it reminded them of memories of harsh days, but because they needed something to sell to make ends meet,” said Kim.

“The office of the Labor Party still exists because it was made with bricks.”

The Headquarters of the Labor Party was featured in a music video of the defunct boy group, Seo Tae-ji and Boys’ “Dreaming for Balhae” in 1994, and it has become a token of peace and reunification ever since then. 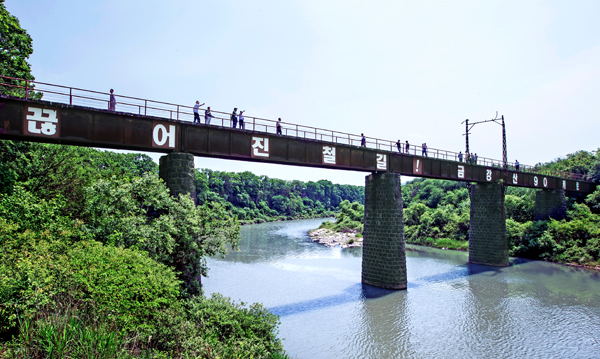 People living in the South used to go to the North by using the railroad bridge. Letters on the bridge read “Disconnected railroad, 90 kilometers (are left) to Mount Kumgang.”

Drive into the forbidden land

The highlight of the Cheolwon tour is probably a car trip into the civilian passage restriction area near the DMZ.

There are still rules to follow, though. All the cars should depart at a designated time by forming a line. The tour takes about three hours and it is available four times a day.

Inside the restricted area, the first thing that comes into sight is one or two cars pulled alongside every paddy field.

“Until the ’80s, residents who cultivate grains [within the restricted area] used to ride bicycles, but they adopted motorcycles in the ’90s and most of them commute to paddy fields by driving their cars,” said Kim.

Within the restricted area, there is the Second Tunnel, which is capable of accommodating 16,000 fully armed soldiers in an hour. The North made the tunnel for overnight attacks on the South.

The next destination is Peace Observatory. Standing at the observatory, the North’s land spreads out in front of your eyes.

The last stop was Woljeongri Station, which is famous for a rusty train with a sign that reads “Iron horse wants to run again,” even though the sign is not available now.

“Numerous Korean soldiers sacrificed their lives to secure Cheolwon during the Korean War,” said Kim. “That made it possible for us to have Cheolwon now. Their sacrifice made the Korea of today.

“If you come to Cheolwon, you would surely feel their spirits and souls,” added Kim.