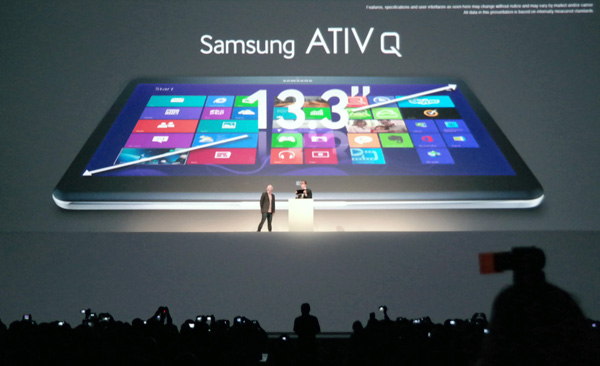 Under the banner of the new Ativ brand, Samsung offered up two laptops, a convertible tablet, a dedicated tablet and a monitor at Samsung Premiere 2013 Galaxy & Ativ event on Thursday in London. Provided by the company

Samsung Electronics, the biggest mobile-phone maker, on Thursday introduced its first tablet that can run both Microsoft Windows 8 and applications based on Google’s Android software.

The ATIV Q tablet will let users share files between Windows 8 and Android applications, Samsung said at an event to unveil the device yesterday in London. The hinged device also has a keyboard that lets the tablet operate like a laptop.

Samsung is chipping away at Apple Inc.’s dominance in tablet devices, touting rival operating systems as it mimics the strategy that made it the most popular mobile-phone maker. Shipments of Samsung tablets, No. 2 to Apple, more than tripled in the first quarter from a year earlier, giving the Korean company 18 percent of the market, according to a May report from researcher IDC. Apple, with about 40 percent of the market, saw shipments rise 65 percent.

Tablets, which are touchscreen computers that occupy a space between laptops and smartphones, are expected to surpass shipments of personal computers by 2015, researcher IDC said in a report last month. Tablet shipments will grow 45 percent from this year to 332.4 million as PCs decline.

Samsung also introduced the ATIV Tab 3, which it’s billing as the thinnest Windows 8 tablet, at approximately the thickness of a smartphone, with a 10-hour battery life. In the Galaxy line, they premiered the Galaxy NX camera, which can connect to 4G and runs on Android, allowing access to applications like mail, music and maps.

On the PC side, Samsung debuted three Windows 8 laptops under the ATIV label, with recent technology that lets users sync mobile devices with their computer more easily.

Microsoft introduced Windows 8, a reworked version of its flagship operating system, to tablet users as it confronts the slump in PC sales. Microsoft has also released its own tablet, Surface, which has struggled to gain market share against Apple and Samsung.