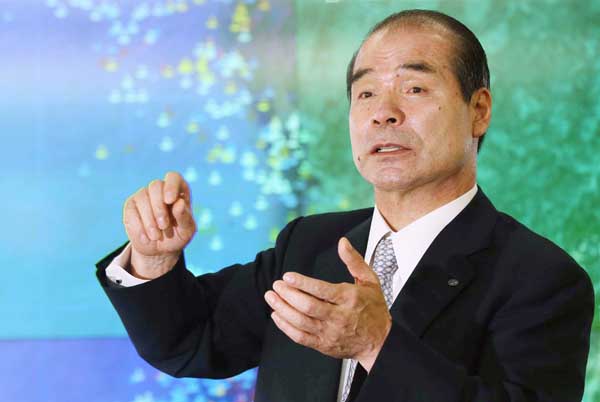 Lee Jong-koo, the president of National Federation of Fisheries Cooperatives, explains the current situation of the domestic fishing industry on June 13 at the cooperatives headquarters in Songpa District, southern Seoul. By Oh Jong-taek

In 2010, as the head commissioner for the Fisheries Commission under the International Cooperative Alliance (ICA), Lee designated June 16 as day for an annual celebration of the World Day of Fisheries Cooperation.

Since then, people involved in the fishing industry from all over the world have come together to discuss various issues regarding the business.

Lee’s career as head commissioner for the last three years is highly praised. His contributions to improving the international fishing industry extend beyond his foundation of the world day.

The Korean National Federation of Fisheries Cooperatives, led by Lee himself, has provided machinery to seven countries, including Vietnam, India and Thailand.

Moreover, a lot of efforts were made in sharing with the international society his knowledge about the fishing industry: he hosted a conference in Korea for fisherman from other countries and published a book called “Sharing Korean National Federation’s Knowledge in Fisheries.”

The commissioner has a lot of tips to share, as he himself began working in the industry right after graduating from high school.

However, despite the rising status of Korea as the international leader in fisheries cooperation, a low perception of and the lack of support for the fishing industry are still significant domestic issues.

Conservation of natural resources, Lee argues, is the most urgent matter in protecting the national fishing industry.

“The building of tidal power plants is going to remove foreshores even more. Also, people in the construction business demand the right to use sea sand but the removal of sea sand will ruin the habitat for fish.”

Fishery resources are seriously threatened as a result of the removal of foreshores by land reclamation projects and the pollution created by nuclear power plants and steel mills.

Construction of tidal power plants and extraction of sea sand are rising issues threatening the fishing industry in recent years.

The 62-year-old Lee is also focused on improving the living standards of fisherman in the country.

“Most of the fishing villages lag in quality of education and health care. Even the government only provides the fishermen 1 percent of the subsidies it provides for agricultural business, even after the Korean fishing industry received a serious blow from the free trade agreements with Chile and the U.S.”

In 2009, Lee founded the Fisherman Education Culture Welfare Foundation to enhance the welfare of Korean fishermen.

The money to build the foundation was raised through Lee’s campaign “Together 1%” in which the workers in the National Federation of Fisheries Cooperatives volunteered to pay 10,000 won ($8.73) every month.

Lee has raised 6.3 billion won and could afford to start up the foundation without any support from the government and business cooperation.

Educating fishermen in culture and business and granting scholarships to students living in fishing villages are parts of the main agenda for the foundation.

“Korea is surrounded by sea on three of the four sides. Discussing Korea’s future without mentioning the maritime industry is totally absurd. The fishing industry has potential to be a stimulus to the national economy as an eco-friendly, higher value-added industry. I have a dream of making fishing villages attractive enough for young adults to return.”