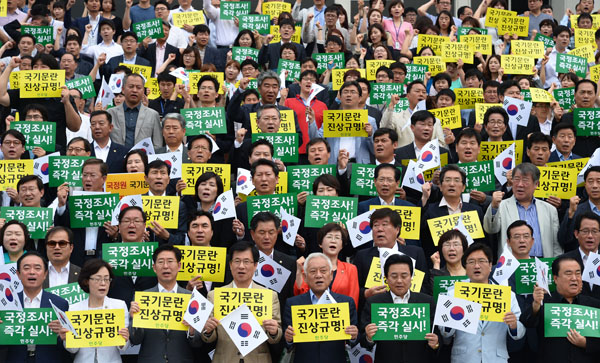 Lawmakers of the main opposition Democratic Party stage a rally on the stairs to the main building of the National Assembly in Yeouido, western Seoul, yesterday to press for a legislative probe into the National Intelligence Service. [NEWSIS]

On Thursday, Suh Sang-kee, a ruling Saenuri Party lawmaker and head of the National Assembly’s Intelligence Committee, made the bombshell revelation that Roh told his North Korean counterpart Kim Jong-il during the 2007 inter-Korean summit that he didn’t recognize the Northern Limit Line, the western maritime border drawn up after the 1950-53 Korean War, as a legitimate boundary.

Suh said he requested state records of the 2007 inter-Korean summit from the National Intelligence Service, and the state spy agency gave him an eight-page document summarizing the secret meeting, which he read with four other Saenuri lawmakers.

His surprise announcement followed the argument by DP lawmaker Park Young-sun on Monday that the controversy over Roh’s comment was a political plot coordinated by the NIS and Saenuri Party ahead of last December’s presidential election.

Last October, Chung Moon-hun, a Saenuri Party lawmaker, said that a transcript existed of a conversation between Roh and Kim at a closed-door meeting on the sidelines of the summit. Chung said Roh described the border as “a line unilaterally drawn by the United States, which wanted to conquer more territory” and he went on to tell Kim, “South Korea won’t recognize the NLL anymore and all the disputes surrounding the line will be resolved if the two Koreas carry out some joint fishing activities.”

Prosecutors closed the case in February, dropping a defamation suit against Chung. But they didn’t confirm whether the allegation was true or not, only saying it is “hard to refute the claim.”

In order to put an end to the long-running dispute, the Saenuri Party says the original records should immediately be opened to the public, which requires approval from more than two-thirds of sitting lawmakers in the legislature. The Saenuri Party currently holds 154 out of the 300-seat legislature, followed by the DP’s 127.

“We can open up [the whole contents of the record] to the public, if more than two-thirds of the lawmakers in the legislature agree to it, including those of the DP,” Choi Kyung-hwan, the Saenuri floor leader, said at a party meeting. “We hope the DP will fairly agree on it and put an end to the controversy.”

Choi’s proposal for opening the records came after some DP members say they can’t trust the summarized document Suh received from the NIS.

The DP suspects that the Saenuri Party appears to feel pinched by the prosecution’s ongoing investigation into the NIS and the ruling party, and is trying to divert public attention away from it by raising the unresolved NLL case again.

On Sunday, prosecutors indicted former NIS chief Won Sei-hoon without detention on suspicion of directing his spy agents to post comments on online portal Web sites to harm the reputation of then-DP presidential candidate Moon Jae-in and rally public support for the Lee Myung-bak administration and the Saenuri Party ahead of the December election.

After the prosecution’s announcement, the DP has pushed for a legislative probe.

DP Chairman Kim Han-gill said yesterday that there would be no problem with them agreeing on opening up the records, but they should wrap up the case of NIS political intervention first, and then move on to the NLL case later.

“The Democratic Party thinks that we can open up the original transcript of the summit with the agreement to the two-thirds vote, based on the National Assembly Act,” Kim said. “But prior to this, we emphasize that we must launch a legislative inspection into the matter of the NIS intervention in the presidential election first.”

Roughly 400 DP lawmakers and members staged a protest in front of the National Assembly building in Yeouido, western Seoul, demanding the Saenuri Party agree on a legislative probe into the NIS case first.

While the bipartisan tensions are rising, the NIS officially said they could open the entire contents of the original records, if necessary.

“In order to dispel all controversies regarding the credibility of the summarized document, the NIS has the will to consider whether to open the entire records of the 2007 inter-Korean summit dialogue through taking legal procedures, if there’s any request from the National Assembly,” the spy agency said in a statement released yesterday.

The NIS statement was a surprise overture, given the fact that the spy agency refused to do that last year, despite persistent Saenuri demands.

Min Hyun-joo, a Saenuri spokeswoman, told the Yonhap News Agency that they could also seek a legislative probe into the NLL case, just like the DP is doing on the NIS issue.

“If a legislative inspection is launched into the NIS, we should also inspect the NLL case together,” Min said.