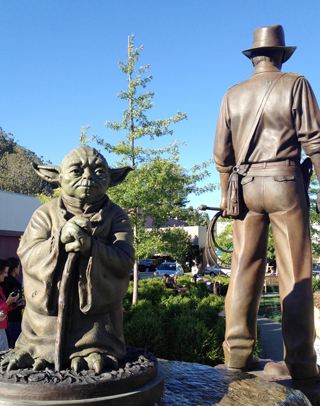 This June 20 photo shows statues of Indiana Jones, right, and Yoda that were unveiled by filmmaker George Lucas and Connie Rodgers, president of the San Anselmo Community Foundation, during a ceremony to officially open Imagination Park in downtown San Anselmo, California. Lucas donated the land for the 8,700-square-foot downtown park in Marin County by razing an existing building at his expense and also paying for the bronze statues created by Berkeley sculptor Lawrence Noble. [AP]