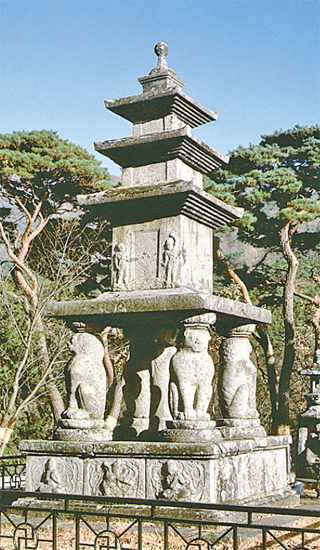 The three-story pagoda faces a stone lantern on high land surrounded by pine trees to the northwest. Hwaeomsa Temple, at the foot of Mount Jiri, was founded by Yeongijosa, a great Buddhist monk in the fourth year of King Jinheung (554).

The temple, which is in the Honam (South Jeolla) region, has some important relics: a stone lantern in front of Gakhwangjeon Hall (National Treasure No. 12); the east and west five-story stone pagodas (Treasures No. 132 and 133); and Saja Pagoda (Treasure No. 300) in front of Wontongjeon Hall.

The three story-pagoda’s body stands on a two-story platform. The upper platform attracts attention because lions serve as pillars on its four corners. The lions’ mouths are open while they are looking forward. A statue of a monk stands with its hands clasped together in the center of the platform surrounded by the lions. The lower platform has prominent carvings of heavenly beings with images of people dancing and singing their praises.