When Lim Young-rok, president of KB Financial Group, was named chairman of the country’s fourth-largest financial holding company earlier this month, there was stiff opposition from the company’s labor union. For two weeks, Lim was prevented by KB Financial Group’s union from entering the workplace despite the fact that he was selected over three other finalists to succeed current chairman Euh Yoon-dae based on objective grounds by outside directors.

It was only last Wednesday that Lim made it into his office after pleading that he had been “selected by the special chairman nominating committee consisted of nine outside directors based on transparent and legitimate procedures.”

The main reason the union didn’t accept Lim is because he is a “Mofia,” a bureaucrat whose career has roots in the Ministry of Finance, or as it is currently labeled, the Ministry of Strategy and Finance. Mofia is a portmanteau of the Ministry of Finance and Mafia. Before becoming president of KB Financial Group in 2010, Lim was second vice finance minister from 2007 to 2008 after building up his career at the ministry after passing the civil service exam in 1978.

“Issues that were raised by the union were that a Mofia shouldn’t be the chief of a private financial holding company and that there should no longer be government-controlled finance,” said an official from the KB Financial Group. “But we believe that they weren’t persuasive enough because this nominee was selected fairly.”

Under the Park Geun-hye administration, several chiefs of the country’s financial institutions, as well as public financial companies, were replaced. And most of the new chairmen are Mofias, a tight clique that sticks together and helps each other build lucrative careers after retiring from the government. 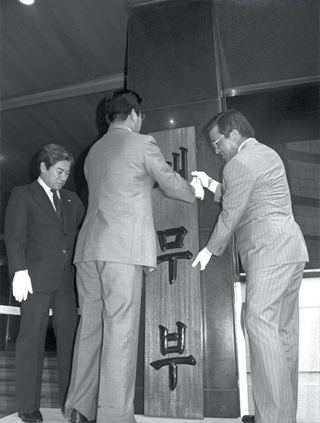 Top brass position the finance ministry’s banner when it started relocating from the capital to Gwacheon in 1983. [JoongAng Ilbo]

Yim Jong-yong, who began his term as chairman of Nonghyup Financial Group last week, is also a Mofia. Yim, former head of the prime minister’s office, began his career as a bureaucrat with the finance ministry and was first vice finance minister from 2010 to 2011.

According to Min Byung-doo, a lawmaker from the main opposition Democratic Party, since 2008, 68 percent of public financial company chiefs have been Mofias. Min believes that Mofias in chairman positions don’t like having their power challenged. He said that from 2008 to 2012, only 1.12 percent of agenda items voted upon by the institution’s board of directors were rejected, and 92.6 percent of agenda items sailed through.

“Rather than feeling bitter about the criticisms that they [Mofias] are being unfairly persecuted, they should first ask themselves the question of whether they truly fulfilled their responsibilities [as chiefs of public financial institutions],” Min said. “[The government] should present a clear standard for selecting a public financial company chief based on a fair selecting procedure.”

Concerns grew recently when the chairman of the Busan-based BS Financial Group offered to step down following pressure from the country’s financial authority. Industry insiders are raising speculation that another Mofia would be appointed.

“If a specific group of people like Mofias take power at financial institutions and public companies through parachute appointments, it will be inevitable that the financial industry will be faced with corruption and irregularities because there will no longer be proper inside monitoring,” said an official from the Korean Financial Industry Union. “In the past, there have been serious problems that have been raised partly as a result of lack of inside monitoring such as the foreign exchange crisis [Asian financial crisis], the credit card bubble, and the savings bank crisis.”

Why are Mofias so powerful in Korea’s financial industry?

Industry insiders note that former bureaucrats have a special power. For financial institutions, public financial companies and financial associations, relationships with the government are important because the financial sector is “all about regulation,” an industry official says.

“They [former bureaucrats] are able to utilize their personal network and be more aggressive in carrying out businesses and projects,” says the industry official.

Shin noted that Korea wasn’t unique in this way.

“Robert Rubin, former chairman of Citigroup, was also Secretary [of the United States Department of the Treasury],” Shin said.

Shin’s remarks further fueled controversy over government-controlled finance industry, especially since Rubin was in the financial industry for decades before he became Secretary of the Treasury.

“It isn’t wrong in principle to appoint someone with ability and expertise to a chief position,” an official from the Financial Services Commission says. “The financial industry is all about regulation and having a chief with a bureaucratic background and network could help spur communication [with the government].”