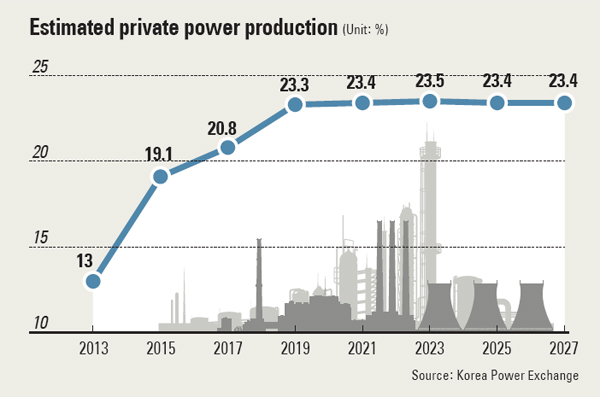 While the country is experiencing a serious power shortage due to the recent shutdown of nuclear reactors, private producers are not helping as their plans to build more coal-powered or gas-powered plants stall due to public opposition.

Company A is mulling over a plan to expand its LNG-run power plant in a small city in Gyeonggi. The company hesitates to make a final decision to embark on the project because of a bad experience. In 2009, it once tried to expand the facility, but faced massive public opposition that turned the whole city into a stage for demonstrations.

“Not only citizens, but also local government agencies there demanded too many things, which seemed as if they were more concerned with some personal interests,” a company employee said.

Company B is going to construct a small coal-powered plant in Gyeonggi slated for completion next year. But the project has been held up by the Ministry of Environment. The ministry has advised the company to build an LNG plant instead of coal.

“As our project is put off, other companies that planned to move near our plant to operate it are seeing losses,” a company spokesman said.

Construction of power plants by private companies has been allowed under the government’s electricity supply plan. But the plan is at risk of collapse as many projects are being delayed. Companies decided to build plants with an intent to make significant profits for the next two to three decades. However, what they didn’t consider were conflicting interests among government branches, environmentalists and citizens. 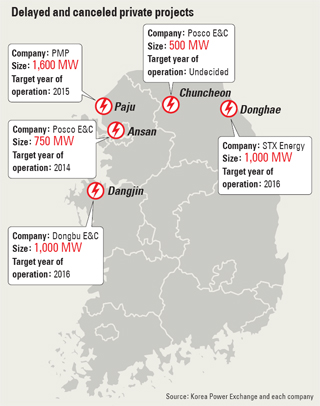 In 2000, private plants produced 8 percent of the country’s total power production. The portion has grown to 13 percent. The government plans to raise it to 23.4 percent by 2027, enough to supply the needs of 7 million people.

“In the third power supply and demand plan by the government, 82 percent of private power plant projects were canceled, which could have produced 4,650 megawatts and was the equivalent of shutting down four nuclear reactors,” said Lee Su-il, a research fellow at Korea Development Institute.

In the fourth government plan, 72.7 percent of initially planned projects have been on hold for more than six months. Currently, 16 of 22 projects are being delayed.

Posco E&C and Hyundai E&C had planned to construct plants in Chuncheon, Gangwon, and Pohang, North Gyeongsang, but they scrapped those plans in the face of fierce opposition from residents. SK E&S also had to abandon its plan to build an LNG power plant in Yangju, Gyeonggi, because the city council didn’t approve.

Company C is currently in a legal battle with a golf club owner in a Gyeonggi city where the company is building a power plant. They got into the battle over power transmission cables that would affect the golf club.

“The plants were going be constructed by 2016, but we don’t think we can make it,” said a company spokesman.

Dongbu is the first private power producer approved by the government to participate in the state-run power business.

STX Energy is facing a cash crunch while building a coal power plant in Donghae, Gangwon. Work on the plant began in December and is about 9 percent complete. The plan was to have 15 percent of work done by now.