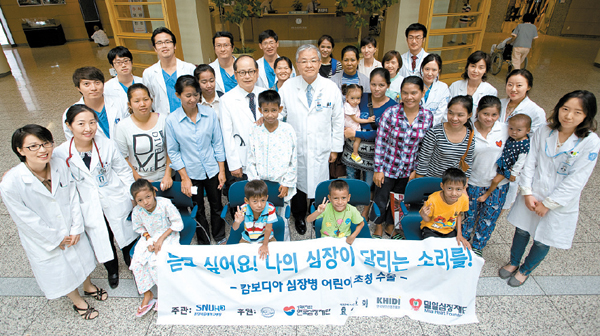 Joko Setino, a 44-year-old Indonesian construction worker, was injured on the job in January. While replacing a 20,000 volt cable, Joko suffered fourth-degree burns - the worst kind - to his feet. The father of 13-year-old twins was taken to Kensaras Hospital in central Java, where doctors amputated all of the toes on his right foot and three toes on his left foot.

But the wounds on Joko’s right foot didn’t heal properly and he badly needed skin grafts that his hospital couldn’t provide. If not, he was at risk of losing his whole leg.

Through the state-run institute’s Medical Korea Project, Joko was able to have two operations in May and one on June 6 at the Hallym University Medical Center. The surgery was a success and Joko is expected to heal soon.

“[Thanks to the operation] I will live my life as a proud and responsible father and husband,” said the Indonesian.

Joko, who returned to Indonesia Saturday, was among 132 foreign patients who received medical treatment in Korea through the Medical Korea Project, which was launched in 2011 to provide Korean medical expertise to patients in need of it from the developing world, especially Southeast Asian nations.

Under the program, air fare and daily expenses in Korea are covered by the state-run institute, while hospital fees are picked up by medical institutions that have joined the cause. This year, a total of 19 hospitals, including Severance, Seoul National University and Samsung Medical Center, support the project.

Priority is given to minors and poor patients who can’t afford good care in their home countries.

“Korean hospitals that have programs in foreign countries giving free medical services make recommendations on patient selection to us,” said Jeon Seong-joo, marketing manager for the international health care team at the health development institute. “After reviewing the eligibility for the program, we select patients to be treated here.”

Foreign hospitals can also apply for the program on behalf of their patients.

A four-year-old girl named Nguyen Ngoc from Hanoi benefitted from the charity last year. Born with Apert Syndrome, a congenital disorder that causes malformations of the skull, face, hands and feet, Nguyen always had difficulty breathing because of the unusual shape of her palate.

After flying to Korea in April 2012, Nguyen had facial restructuring operations at Seoul’s Severance Hospital and spent a month in an intensive care unit of the hospital.

Since the program was launched in 2011, a total of 132 patients from 20 nations such as Vietnam, Cambodia and Malaysia came to Korea with the support of 19 medical institutions in the country.

Among the patients, 78, or 59 percent, received heart surgeries. Twelve were burn patients like Joko.

“Through this medical-sharing program, we aim to create a positive national image of professional medical expertise as well as fulfilling our responsibility in the global community,” said Kim Ki-sung, director of the department of international cooperation at the health development institute.