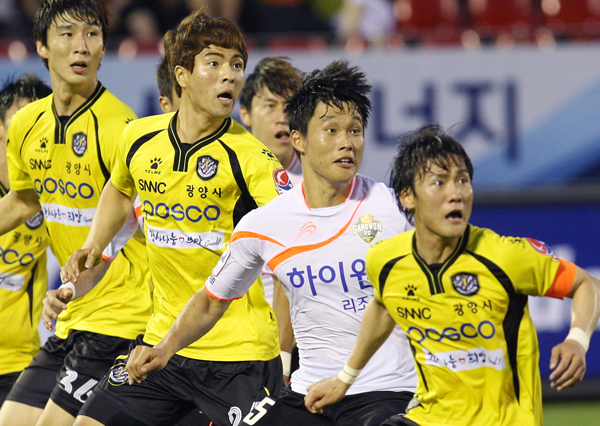 Park Sang-jin of Gangwon FC, second from right, vies with Chunnam Dragons defenders for the ball during a K-League Classic match on Sunday. [NEWSIS]

The K-League Classic resumed from a two-week break with two upsets, adding dynamism to the league as it strives to draw back fans’ attention from the World Cup qualifying campaign.

Sergio Escudero scored the 61st-minute winner on a Mauricio Alejandro Molina Uribe pass at Seoul World Cup Stadium, giving Choi his first win against Yoon, who also attended Dongnae High School in Busan and Yonsei University. Choi, who took the helm of the Seoul team in April 2011, faced off against Seongnam Chunma, led by Yoon, six times, losing five of the matches and drawing one. Yoon moved to Busan at the end of last year, and his club beat FC Seoul 1-0 on March 17 in first match-up against Choi since then.

“I am happy to break the jinx,” Choi said. “I think I have become stronger since losing to him last time.”

With its second-straight victory, Seoul jumped by three notches to sixth place, reviving hopes of defending its title. Busan dropped from the sixth to eighth, trailing Seoul on goal difference.

At Daegu Stadium, Daegu FC sank Ulsan Hyundai 5-3, clinching its first victory of the season on its 14th attempt. Forward Hwang Il-su scored twice and Song Chang-ho, Derek Asamoah and Han Seung-yeop added one each, helping Daegu escape from last place. Daegu is ahead of Daejeon FC on goal difference. Ulsan had its three-game winning streak snapped and failed to reduce the gap with the league-leading Pohang Steelers, who are five points ahead.

Kim Shin-wook gave Ulsan a 1-0 lead in the 29th minute, but Hwang leveled four minutes later. Song scored a get-ahead goal for Daegu in the 43rd minute, and Asamoah added to the lead with an overhead kick in the first injury time. Hwang made it 4-1 three minutes into the second half. Ulsan pulled back with a goal by Rafael Oliveira in the 55th minute and another by Kim Sung-hwan in the 63rd minute, but Han sealed the victory with an 83rd minute goal.