Hyun looks to services for growth

Hyun looks to services for growth 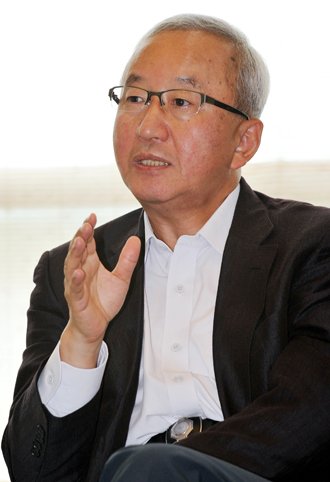 The government wants to deregulate the nation’s service sector to spur growth in a prolonged slowdown, Hyun Oh-seok, deputy prime minister for the economy and minister of strategy and finance, said in an exclusive interview with the Korea JoongAng Daily and JoongAng Ilbo.

The government is also mulling over ways to attract foreign investments in those areas.

“We need a broader prospect for foreign investments,” Hyun said. “Foreign companies, especially those in possession of technologies and services that we need, are more than welcome.”

From next month, the government will start unveiling a series of measures to remove regulations that are believed to be hindering growth in those areas. “The administration will take a two-track strategy to find ways to loosen regulations on individual areas of the service industry, while trying to pass a pending bill at the National Assembly,” Hyun said.

The last administration submitted a bill in 2011 that was supposed to lead to development of the service sector, but it has been stuck in the National Assembly for three years.

Lawmakers have opposed the bill because since it allows the establishment of so-called “meditels,” accommodation facilities for foreign tourists who visit the country for the purpose of receiving medical treatments.

The government recently announced it will allow not only foreigners but also Korean residents to use meditels. Legislators argue that the move would ultimately lead to the privatization of the medical industry.

The Park Geun-hye government has chosen development of service industries as one of 140 goals for her five-year term and is pushing for passage of the pending bill, which also allows the current administration to set specific plans to reach the goal.

Here are excerpts from the interview with the deputy prime minister.

Q. What is your top priority in economic policy?

A. The most urgent task ahead of us is to combat the current slow growth trend. If the slowdown continues for more than a year, confidence in the economy will wither away. Now is a very critical moment to tackle the slowing, and we need crucial momentum.

The economy has been experiencing less than one percent growth for eight straight quarters. The foremost goal is to get out of this slowdown. We have to mobilize every possible measure to achieve the goal. All of the measures that have been announced by the government so far - drawing up a supplementary budget, lowering the benchmark interest rate, reviving the housing market and easing regulations on investment - are aimed at revitalizing the economy.

There is no obvious answer to economic policy, not only for us but also for other countries. I have three principles when I decide top priority. First, an economic policy should always be preemptive. It helps no one when the weather forecaster tells us that it’s raining outside. Secondly, we need harmony and balance. An economic policy shouldn’t be tilted towards one side or another. Leaving the other side behind always incurs huge costs.

The second-most important task is to address structural problems in the economy that weaken growth potential. One of them is regulation.

My third goal is to make sure policies can be enforced effectively. I will always be monitoring how policies that are announced affect the market.

How do you assess effectiveness of the measures so far? Is a second supplementary budget needed to make up for the shortfall in tax revenue?

There is no big jump in the economy but there are turnaround signs in some economic indicators like industrial output, consumer confidence and business response. The government measures will have more effect on the market in the second half.

The economy isn’t so bad that we need another extra budget. As the government is making strenuous efforts to tap into the underground economy, we don’t have to worry about tax revenue shortfalls. If the economy improves in the second half of the year, the government’s tax revenues would also increase this year. The total amount of tax revenues is always dependent on how the economy did last year.

Will the latest job creation measures be effective despite the negative public reaction to more hourly jobs?

However, the government will not force companies to create the jobs. Otherwise, they will end up slashing employment.

Can businesses expect more regulations to be eased?

The first investment promotion meeting in May was quite successful. I am reviewing how the measures from the meeting are being applied to the market every month. At the end of this month, there will be a second meeting to expand the measures focusing on easing regulations on service businesses. The government’s legislation on development of the service sector is pending at the National Assembly. We will try to pass the bill this month while looking for areas that need deregulation.

The administration will approach each sector of the service industry, for example medical services, tourism and entertainment, one by one, to find out if there’s any excess regulation. Services are the most important area where we can create new jobs and boost growth potential.

What are your measures for so-called U-turn businesses, or bringing Korean production overseas back home?

The government plans to increase incentives - including tax reductions, subsidies and preferences for land leases - for Korean companies operating overseas to encourage them to come back.

Some criticize your growth-focused policies. What is your view on distribution?

You shouldn’t separate growth and distribution, which is welfare. Welfare can’t exist without growth and vice versa. But the important fact is that growth creates jobs. So, basically distribution can only be possible through growth. That is the reason why the government has set the goal of reaching 70 percent in the overall employment rate. It aims for a balance of growth and distribution.

What are government plans for the end of U.S. quantitative easing?

As seen, the U.S.’s so-called exit policy has had an immediate impact on the local financial market. We have to keep monitoring to see how long that impact will persist. But we don’t need to worry because such short-term shocks can be eased by regulating the liquidity of foreign currencies and using currency swap deals. The government has various scenarios.

But there is a more important implication here. Ending the QE means from a long-term prospect that the U.S. economy is on a recovery track. In other words, we need investments right now, and we have to prepare for a recovery in the real economy.