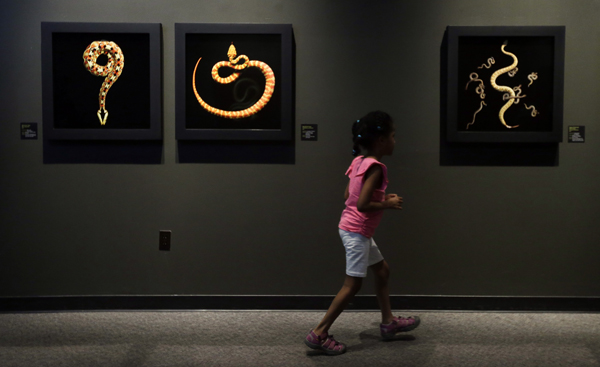 A young visitor to the The Academy of Natural Sciences of Drexel University views an exhibition of Mark Laita’s photographs of deadly snakes on Wednesday in Philadelphia. [AP/NEWSIS]

PHILADELPHIA - A striking new photography exhibit at the Academy of Natural Sciences might make people scared of snakes a bit rattled, but there’s no better way to appreciate these incredible creatures up close while staying out of fang’s reach.

The snake charmer who created the images is photographer Mark Laita, who spent a year visiting zoos, breeders, collectors and venom labs in Central America and the United States. Using a large-format camera and somehow catching the very-much-alive snakes in dramatic poses, he captured some of the world’s most poisonous creatures with details so vivid and textured that they seem unreal.

Academy curators chose 12 of the nearly 100 snakes in his art book, “Serpentine,” for the exhibit running until Sep. 15. Laita photographed each snake right after it molted, when the colors are the most brilliant.

“It was hard to pick 12 because all of them are incredible,” said Jennifer Sontchi, the academy’s director of exhibits.

As dazzling as the photo reproductions appear in the book, the actual photographs on exhibit must be seen to be believed. They appear almost three-dimensional, dramatically lit in black frames hung on a black wall, while the acid-bright colors emit an otherworldly glow.

“It’s as if these creatures are to their core so inherently beautiful,” the Los Angeles-based photographer says in the book, “that there is nothing they can do, no position they can take, that fails to be anything but mesmerizing.”

These slithery subjects didn’t just coil up for Laita - they showed off their sinuous skills to weave into the shape of an ampersand, a fiddlehead, a figure-eight, a braid. He didn’t pose any of his models; he just set them on a black velvet background and waited for them to show their stuff.

“It was a collaboration between him and the snake,” Sontchi said.

The project for him was an aesthetic examination of color, form and movement, but the natural human response to snakes - good or bad - adds another layer of meaning for the viewer.

Laita paid a price for beauty: He was bitten by one of his models, a deadly black mamba snake. Luckily for him, it was a nonvenomous dry bite, which he inadvertently caught on film the moment it happened.

Other snakes in the photo exhibit include a blue Malaysian coral snake, an emerald tree boa, a Brazilian rainbow boa constrictor and the aptly named beautiful pit viper, boasting its neon pink and green scales.

“Could you ever make a creature like that up in your wildest dreams?” Sontchi said of the viper, which also is the cover snake of Laita’s book. “Who would ever think that nature could be so bodacious? It’s got so much more imagination than we do.”

Before “Serpentine,” Laita similarly explored creatures of the deep for his book “Sea” and has done extensive work for big-name commercial clients in addition to fine art. The U.S. Postal Service issued stamps featuring a series of his floral photographs in 2007.