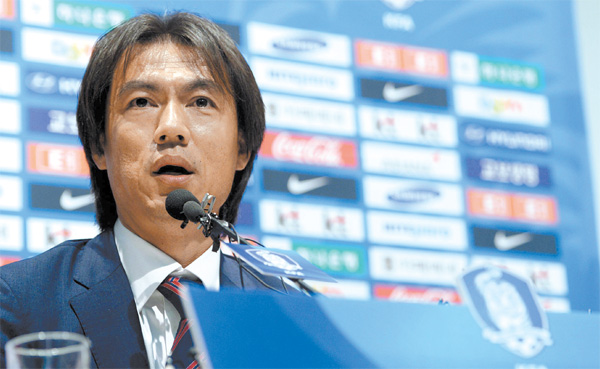 Korean national football coach Hong Myung-bo, who took over for Choi Kang-hee on Monday, says that his team’s slogan will be ‘One Team, One Spirit, One Goal’ and that his players will display home-grown, team-oriented football at next year’s Brazil World Cup. [NEWSIS]

The former Olympic coach was named as Choi Kang-hee’s replacement on Monday, inheriting a team divided and bruised despite winning its eighth successive World Cup berth. Korea will enter the Brazil World Cup with more players playing overseas than ever before, but much retooling remains to be done.

Choi’s squad lost to Iran twice in the final qualifiers and finished ahead of Uzbekistan only on goal difference, a mediocre result given its stellar lineup.

A lack of cohesion, particularly between the domestic players and those on overseas teams, ended the 18-month-long stint of the former Jeonbuk Motors coach on a bad note.

Hong said Choi and his predecessor, Cho Kwang-rae, should be given due credit for qualifying Korea for Brazil, although he was wary of divisions on the national team. Hong said that he would try to unite the players.

“From beginning to end, I will prioritize teamwork,” Hong said. “It could be good if a player can take a central role in leading a team. But, I think having 23 captains is better than having one captain.

“In that regard, ‘One Team, One Spirit, One Goal’ will be the slogan of our team.

“If a player does not fall into this category, it will be difficult for him to get onto the national team. I would focus on choosing the players to make the best team rather than choosing the best players for a team.”

Hong proved that he was good at building a team when he led the young Taegeuk Warriors, 10 of whom were playing overseas, to the London Olympics. His team won a bronze medal, bringing home Korea’s first Olympic medal in football. Those players, whom local fans call the Hong Myung-bo kids, emerged as the favorites to lead the national team after Hong was named as the coach.

The former LA Galaxy defender, who also played for five years in Japan, said that he would not favor anyone.

“The past does not guarantee the future,” Hong said, referring to the members of the Olympic team.

“We still have a year left and no one knows what is going to happen.

“They will have to make much effort. I will watch them closely and evaluate them thoroughly.”

Hong also refused to discriminate players for just playing domestically. When asked about Lee Dong-gook, a 34-year-old Jeonbuk striker who many fans criticized for his lack of defense, and limiting the playing time of younger strikers from overseas, Hong said that he would not publicly evaluate players in order to avoid creating unnecessary controversies.

Hong’s comeback sparked expectations of the return of his teammates from the 2002 World Cup semifinalists, such as Park Ji-sung of Queens Park Rangers, who retired from the national team in January 2011.

Hong spoke highly of Park’s contribution to the development of Korean football, but dismissed the chance of Park’s return, saying that his will should be respected.

Hong, whom the Korea Football Association said last week was the favorite candidate, was rumored to take over for Choi as early as January, when he embarked on a five-month coaching training course with Anzhi Makhachkala, a Russian professional club managed by the former Korean football coach Guus Hiddink.

Hong revealed that he was given the same offer earlier when he was at the helm of the Olympic team. He said that he decided to take the job while taking the training course in Russia.

“While I was in Russia, I got to realize that Korean players are special,” Hong said.

“Anzhi had the players from 11 countries, and it was not easy to manage them. Compared to them, Korean players seemed great in attitude and held respect for the opponents,” Hong said.

“I got to miss the time that I had spent with the Korean players in the run-up to the Olympics. I came to think that I would be happy to take such a chance once more.”