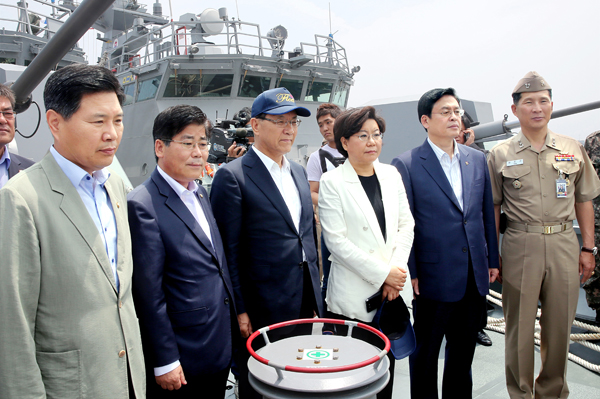 ccccJune is the month of patriots and veterans, and many politicians are making visits to military units. The ruling Saenuri Party leaders visited the 1st Navy Fleet in Donghae, Gangwon on June 20 and will host the supreme council meeting on Baekryeong Island in the West Sea. The opposition Democratic Party leaders visited the new recruit training facility in Goyang, Gyeonggi on June 24. The politicians seem to want to demonstrate their dedication to national security. Both parties have uploaded photos from their visits to the military units. The focus of the photos is, of course, not the soldiers but the politicians.

The military divisions cannot reject politicians’ requests for visits as the military also needs to publicize its image. It doesn’t want to get criticized for refusing the visits, though they may interfere with training or operations.

It doesn’t want to upset the politicians as their response can affect the promotion or budget.

The commanders are not bothered by such visits as they receive a gift of money and have face time with the politicians. But the soldiers are not very thrilled. Anyone who has served in the military knows that a visit by a politician means a big cleanup. We cannot say that the preparation does not affect their regular routine. Moreover, the front line like Baekryeong Island requires the highest vigilance around the clock. Receiving important guests may let down our guard.

I don’t mean to say that paying an encouraging visit is undesirable or politicians should stay away from the military. But they should not make such a visit a promotional event. The politicians seem to care more about the camera capturing their moment than the faces of the soldiers. Putting on a military jacket and taking a photograph with soldiers isn’t proof of a desire for national security. The military unit is not a mere backdrop for photos for election campaigns.

The soldiers guarding the frontline receive 12,000 to 14,000 won ($10-$12) in hardship allowance per month in addition to their regular salary. These sons of Korea are faithfully fulfilling their military duties even when they are paid about 400 won per day to do it. They are not extras for the promotional photos of politicians.

If the politicians truly want to encourage and boost the morale of soldiers, they should keep a low profile for their visits. If they truly care for the military, there’s no reason to take photos to promote their presence.

It would be more meaningful to give soldiers some sweet and thoughtful gifts - like a watermelon party on a hot day or a coffee break on a winter day. They don’t even need to actually visit the military facility in person to help them. They can cut down on shameless pork-barrel budgets and divert the money to the welfare of the soldiers. Then we will recognize their sincerity.

Do our politicians really care for and respect the ROK Armed Forces? Last fall, a Saenuri Party lawmaker ordered members of the Joint Chiefs of Staff to sit and stand at the National Assembly’s regular inspection on the Ministry of Defense and the Joint Chiefs of Staff. The dignity of the military and consideration for their morale were nowhere to be found.

Immediately after North Korea’s bombardment of Yeonpyeong Island in 2010, a more ridiculous event took place. A senior opposition party lawmaker visited the scene of the bombing, and when he found a liquor bottle, he senselessly joked, “This is really a drinking bomb!” The Democratic Party leaders harshly criticized the gunnery exercise of our military. They claimed that the exercise should be stopped as it could lead to a war, adding that President Lee Myung-bak was solely responsible for all the events occurring as a result of the gunnery exercise.

Some of the politicians who made such comments are still members of the National Assembly. Of course, the Democratic Party has changed considerably, and I do not doubt the awareness of national security of the current opposition party. But three years are not long enough to completely forget their image.

The soldiers often say, “Victory! Please bear with the hardship.” It may sound unfamiliar to civilians, and when you hear the soldiers say it, you might feel sorry. They are actually the ones who are bearing the hardship to defend the Military Demarcation Line and the Northern Limit Line in the West Sea. But our lawmakers are fighting against one another in comfort and safety behind the front line. They should be ashamed.