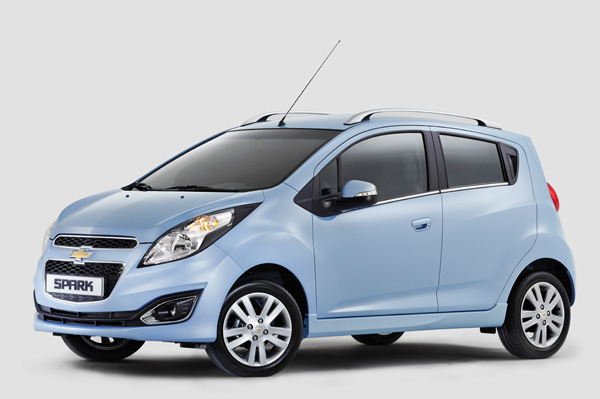 As a two-time Toyota buyer, Ashley Potts didn’t even think to look at a Chevrolet when she began shopping for a small car with better fuel efficiency.

“They’ve been big gas guzzlers,” said Potts, 34, who works in human resources at a hotel in Boston, last week. “I’d never given it much thought. I’d been happy with my Toyotas for 10 years.”

Then, during a chance encounter in April, she stumbled upon a Chevrolet Spark, a mini car that looks almost like a cartoon with its bulbous headlamps, exaggerated grille, a color palette with options such as Techno Pink and body length 3 feet (0.9 meter) shorter than a Toyota Corolla. It gave her a taste of the dramatic changes taking place at General Motors’ dealerships across the United States.

“It was fun to drive and it had all the bells and whistles I wanted,” she said of the Spark. She immediately bought a Spark, which starts at $12,170, and can come with features usually found on bigger cars, such as Bluetooth and keyless entry.

Modern GM has never successfully sold such a tiny car in the United States. The Spark’s success today, 26,869 U.S. deliveries in its first 12 months, exceeds GM’s initial expectations by as much as 35 percent, said a source familiar with the company’s internal planning.

GM, Ford Motor and Chrysler Group have all gained market share in the first five months this year, the first time that has happened in at least 18 years, as they sell some of their best cars in a generation. The Spark ranked No. 2 for quality in its segment in J.D. Power & Associates’ Initial Quality Study, an important industry benchmark.

The company sold 275,228 Sparks last year worldwide. While the car first went on sale in the United States in June 2012, it arrived in Korean showrooms in 2009. GM has sold more than 720,000 globally, according to the company.

The Spark’s design was led by designers in Korea, where small cars are more popular, which underscores the progress GM has made in developing cars using its global resources. It’s the same team that led development of the Chevrolet Cruze and Sonic, compact cars that are still larger than the mini Spark and that have seen sales success around the world.

Alan Baum, an industry analyst with Baum & Associates, had expected an annual sales rate of 25,000 in the United States, while 35,000 now looks more likely, he said.

“The price is obviously aggressive and resulting in good sales,” Baum said last week in an e-mail. “In addition, the car is doing well because its?competitors (which are few) have been less focused on the U.S. market.”

While not a best seller for a company that delivered 418,312 Chevrolet Silverado pickups in the United States last year, the Spark is bringing in a new kind of customer. It has the highest percentage of buyers younger than 35 among Chevy models and attracts the largest percentage of first-time new car buyers, according to the company’s internal figures.

All of that is important for rebuilding Chevrolet, said Cristi Landy, marketing manager for the car.

“It helps people look at Chevy differently,” she said. “It forces people to say, ‘Oh geez, this is a Chevy.’” Bloomberg