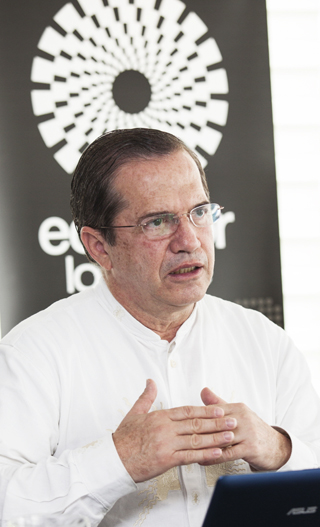 On a visit to Seoul last week, Ecuadorian Foreign Minister Ricardo Patino talked about the recent impasse with the British government over Julian Assange’s asylum bid.

In Seoul and in a followup message on Twitter, Patino discussed how his country will respond to any asylum request from fugitive U.S. whistle-blower Edward Snowden.

“If we receive an asylum request from Edward Snowden, Ecuador will review his request ‘with responsibility’ as we did when Julian Assange sought asylum [with Ecuador],” the foreign minister said Friday.

The former U.S. spy agency contractor’s asylum bid was not certain when Patino held a press conference in western Seoul Friday but the Ecuadorian official confirmed his request on Monday via his Twitter account.

“The Government of Ecuador has received an asylum request from Edward J. Snowden,” his tweet read. After four days in Korea, Patino went on to Vietnam.

Although the envoy allotted a fair amount of time at the press conference to questions about Assange and Snowden, the main focus of the visit was negotiations on a free trade agreement.

“We hope that negotiations with Korea for a free trade agreement will begin in the near future,” he said. “The two countries wrapped up the feasibility study a week ago and we are waiting for the Korean government’s decision to proceed.”

Patino visited Daedeok Science Town in Daejeon during his visit to seek cooperation on a similar project, the Yachay city of knowledge, in Ecuador, meeting president of the Innopolis Foundation Lee Jae-goo and high-ranking officials from the Korea Research Institute of Bioscience and Biotechnology.

A memorandum between Daedok Innopolis and Yachay will be signed for the development of the second phase of the Ecuadorian tech center.

“I had an opportunity to meet different executives and had time to find mutual interests,” he said, adding that Korean Air is considering launching a new route to Ecuador.

The Australian whistle-blower has been staying inside the Ecuadorian embassy in London for one year to avoid extradition to Sweden.

He is wanted there for questioning over allegations by two women of sexual offenses - which he denies - and will be arrested if he leaves the building.

“The British government cites different legal justifications from Ecuador but we need to keep in mind there is law above regional justice systems which is international human rights law,” the foreign minister said.

Patino stressed that Ecuador believes in the protection of basic individual human rights.

He compared the granting of asylum to protecting David fighting against Goliath.

“We need to support a David who confronts Goliath,” he said.