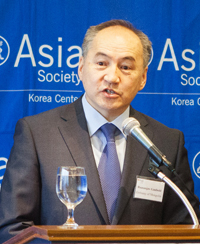 Today’s presidential elections in Mongolia will not affect its economic and political ties with its so called “third neighbor” trading partners, including Korea, according to Ambassador Baasanjav Ganbold.

Speaking to a primarily diplomatic audience at a lunch held by the Asia Society’s Korea Center at the Lotte Hotel in central Seoul on Tuesday, Ganbold said all presidential candidates value Mongolia’s relationship with countries like Korea, but said it shouldn’t necessarily trump its relations with Russia and China.

“We hope very much that after the elections .?.?. the strategically important economic projects will be pushed actively,” Ganbold told the audience. “All parties and candidates are very enthusiastic .?.?. to push ahead with those projects.”

According to the Korean International Trade Association, Korea’s exports to Mongolia totaled $433 million in 2012, making it one of Mongolia’s biggest trading partners.

Korea is importantly considered one of the “third neighbor” countries which Mongolia seeks to work closely with, in line with one of the core tenets of its political policies.

“Even though the government of Mongolia has worked very hard on this front to attract as many investors as possible from our third neighbor countries, personally I think we have to be realistic,” Ganbold said.

“The influence of Russia and China will always be dominant in Mongolia in its international standing and economic life.

“Some people say there should be 30 percent of investment from China, 30 percent from Russia and 30 percent from all those collective third neighbors. Even in some foreign policy papers and academic research it says this. I think this is unrealistic.”

He says Mongolia needs to keep the interests of China and Russia in mind when making decisions about foreign investment in the country.

With more than one quarter of its emigrant population living in Korea, Ganbold says more Mongolian students are looking at studying in Korea.

There are 26,000 Mongolians living in Korea, almost 1 percent of Mongolia’s population. According to Ganbold, 5,000 of those are students, one of the largest foreign student populations in Korea.

He says Mongolian students prefer to study in counties like Korea over its geographical neighbors, China and Russia.

“They feel pretty much at home in Korea and they’re geographically our closest third neighbor. The standards of education are pretty much at the level of the U.S., so that attracts them,” Ganbold said. “And the Korean language is easy for Mongolians to learn. That’s why they’re coming in big numbers to Korea.”

Mongolian students attending any of the top 100 universities in the world are eligible to have half their university fees paid for by the Mongolian government.

It was attended by about 50 people with ambassadors and embassy representatives from a number of counties including Japan, Singapore, Russia, Australia, Israel, Afghanistan, Tunisia, Romania, Bulgaria and others.