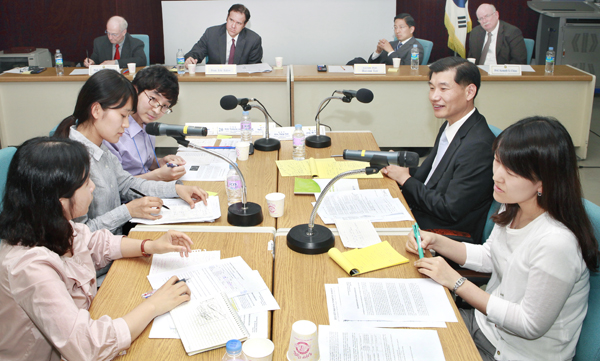 Government officials from the tax, health, elections and weapons acquisition sectors participate in a negotiation competition on Thursday after a two-week training program organized by the Central Officials Training Institute. By Park Sang-moon

A young woman from the National Election Commission, the agency that oversees fair elections in Korea, engaged in a rare argument with a military weapons negotiator from the Defense Acquisition Program Administration in a conference room at the government complex in Gwacheon, Gyeonggi, on Thursday.

They were participating in a mock negotiation competition in English about the exclusive distribution of an airline newsletter. Both were finalists in a two-week training program on international negotiation offered by the Central Officials Training Institute (COTI).

This year, 20 participants from government and public organizations joined the program, which began in 2008. Many have experience in international negotiations, whether for legal contracts or acquisition of military equipment.

Major Kim Kang-suk, a veteran negotiator at the Defense Acquisition Program Administration, has participated in weapons acquisition deals with the United States, Russia, Israel, England and Germany, and was selected by judges as the top negotiator of the program.

“Because I have a lot of experience negotiating, I was curious about how I would appear to others when I negotiate bilateral and multilateral agreements, and how a third party, an expert, would view my negotiating skills,” said Kim. “Many officials are those who are in the position to become action officers and practice how to prepare scenarios and manage the negotiating process before becoming delegation chiefs.”

Kim’s colleague Park Min-joo has just two years of experience in the field and enjoyed the program for other reasons.

“It’s OK to fail because you can learn from failures to improve yourself at each opportunity,” she said.

The program originally targeted government officials but branched out to public organizations in 2011. Representative participants include the Ministry of Strategy and Finance and the Ministry of Trade Industry and Energy as well as the National Tax Service, Korea Tourism Organization and National Election Commission.

Participants were required to speak in English, and attended lectures by law professors, experienced international negotiators and government officials.

Nam Su-jin of the National Election Commission was the leader of the winning team and one of just seven female participants. As the youngest among her colleagues, she had less experience, but her team members complimented her “calm yet resilient leadership.”

Others like 40-year-old Shin Yong-hyeub, a section head at the National Health Insurance Service, had no negotiating experience.

“We are now in a society that is moving from basic national negotiations to global negotiations,” said Shin. “For people like me, we find merit in this program because all companies are interested in moving into the global arena.”

“In the 21st century, international negotiation is becoming more relevant in the areas of foreign affairs, trade, sports and culture,” he said. “The fundamental difference between negotiation that happens within Korea and what happens abroad is a difference in the way of thinking because we know what kind of culture and thoughts we have and don’t need to prepare for that.”