Renewing arirang and a nation

Renewing arirang and a nation

Sori (narrative singing) performers show their skills in the Korean musical “Arirang.” The show includes new and updated versions of the national folk song. Provided by the National Gugak Center

One day in 2018, Korea - the only divided country in the world - becomes unified. Upon hearing the news, those who live in South Korea but have their hometown in the North happily sing the country’s traditional folk song arirang, while those living in third counties joyfully hum the tune as they prepare to return home.

This is the hope of 73-year-old playwright Oh Tae-seok turned into a musical, or sorigeuk, at the National Gugak Center. The story of the Korean musical “Arirang” takes place at the Korea Theater in Kazakhstan as people discuss ways to return the remains of Gen. Hong Beom-do (1868-1943) upon hearing about the unification. General Hong was a commander of the Korean Independence Army. He won a huge victory against Japanese forces in the Battle of Bongodong and the Battle of Cheongsalli in 1920. However, in September 1921, he was disarmed and deported to Kazakhstan by the Soviet Army. He worked as a janitor at the Korea Theater in Kzyl-Orda until he died at the age of 75, and his life story has been woven into the musical.

It also features new and existing versions of arirang performed by traditional singers.

“Arirang is a song that’s like the pulse of the Korean people. Different versions of arirang have their own stories. It’s a sound that makes Korean hearts pound,” said Oh, the playwright and director of the musical. After arirang was added to Unesco’s Intangible Cultural Heritage List in December, Oh thought about how to share this intangible treasure with young Koreans and decided to go with the “most sensational event of reunification.” 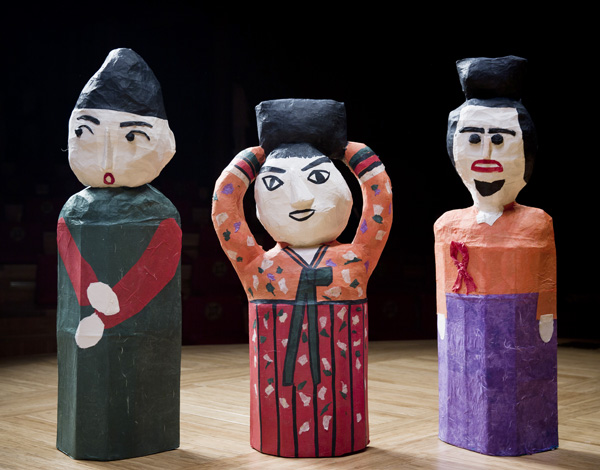 The set for the Korean musical “Arirang,” which runs from today to Sunday. Provided by the National Gugak Center

As the musical follows the story of General Hong, five existing versions of arirang, including “Jajin Ari,” “Haeju Arirang,” “Independence Army Arirang,” “Sangju Arirang” and “Bonjo Arirang” are performed along with modernized adaptations.

“As Koreans experience unification, they sing arirang, which is no longer a song that expresses deep resentment but new hope and joy,” Oh said.

Composer Kim Seong-guk wrote the new versions of song that can be sung in a more joyful way.

“So far, nearly all versions of arirang have been songs of pain and agony, but now when the unification comes, arirang will become a song of joy and hope,” Kim said. “We hope that the new versions of arirang in the musical become folk songs for Koreans many decades in the future.”

Singers, who usually use microphones, will forego amplifiers for this performance and will also be barefoot.

“Director Oh requested that the singers not use microphones or wear makeup or shoes. It’s unusual, but this show has become a great opportunity for the singers to rethink natural sound and delivery to the audience,” said Kim Gwang-sook, artistic director of the folk music group within the National Gugak Center.