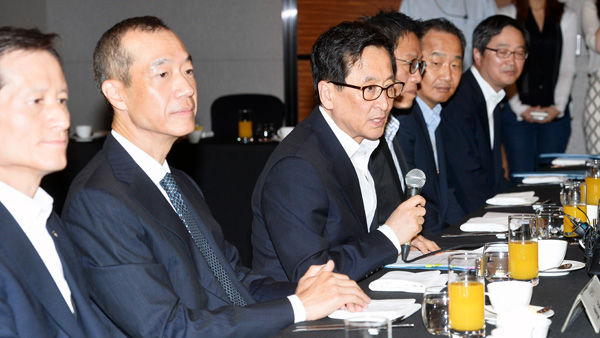 “To cope with the changing environment in the financial industry such as a slowdown in the growth of credit card usage, we will actively devise measures to ease regulations to help card companies raise profits and encourage financial innovations,” Choi said yesterday.

His comments were made during a meeting with chief executives of eight card companies and the chairman of the Credit Finance Association.

The meeting was held as card companies are suffering from plunging profits due to tightened government regulations and a sluggish economy at home and abroad that have led to a decrease in consumers’ credit card spending.

“To help card companies develop [new] products more swiftly, we will improve the overall examination procedure [of the products] by shortening the screening period,” Choi said. “When screening products that have low possibility of violating consumer rights, we will enforce a fast-track policy and finish reviews within two working days.”

According to an official from the FSS, the screening procedure on average took 44 days last year.

Also, the FSS will consider measures to allow card companies to expand their customer bases by allowing more aggressive marketing.

In the meantime, Choi also asked card company chiefs to be fully prepared for risks in times of economic uncertainty.

“We know card companies are in a difficult business environment due to market uncertainty as the country experiences a low growth trend that has led to a contraction in consumer spending,” he said. “At such times, card companies should be fully prepared to carry out risk management so that risk factors at home and abroad do not catch them by surprise.”

Regarding concerns over the possibility that the United States Federal Reserve may reduce its quantitative easing stimulus earlier than expected, Choi said that “many global investment banks are diagnosing the [Fed’s move] as a ‘healthy correction’ of the market” and that “Korea’s financial market had somewhat expected the pullout.”

“Fundamentals remain relatively strong such as Korea’s current account surplus and we expect Korea to be not as badly affected compared to other countries,” he said.