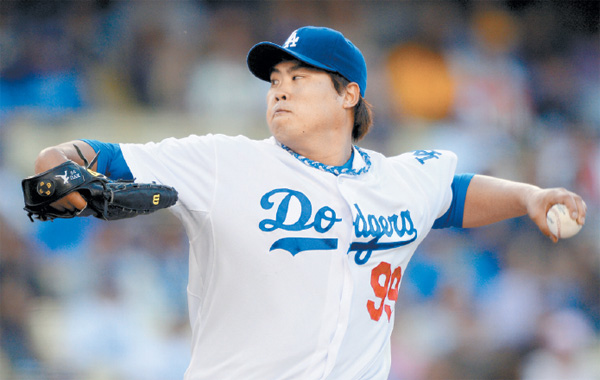 LOS ANGELES - One by one, Los Angeles Dodgers opponents are learning the perils of challenging Yasiel Puig.

The rookie sensation hit his seventh home run in 20 major league games and added a tie-breaking single in the eighth inning against Madison Bumgarner, leading the Dodgers to a 3-1 victory over the San Francisco Giants on Monday night.

Nick Punto, who replaced third baseman Juan Uribe in a double switch, led off the eighth with an opposite-field double down the right-field line. Mark Ellis sacrificed Punto to third and reached safely when Bumgarner threw high to first for an error.

Puig greeted George Kontos with a single to left that scored Punto.

“He’s someone who really thrives in the moment,” A.J. Ellis said. “One of my best friends in baseball is the Double-A manager for the Diamondbacks, Andy Green. And when I called him and asked him what he thought about Puig, the thing that impressed him the most was that Puig never shied away from the big stage. It seemed like his best at-bats in a game came in the late stages and those clutch situations. And we’re seeing that right now. There’s no secret that he loves the spotlight.”

Hanley Ramirez drove in the final run two batters later on a liner toward the middle that shortstop Brandon Crawford knocked down with a lunging attempt before getting the out at first.

Kontos was recalled from Triple-A Fresno before the game, while Jean Machi was sent back to the Giants’ Pacific Coast League club. Kontos was optioned to the minors on June 11, the day he received a three-game suspension for throwing at Pittsburgh’s Andrew McCutchen. But since he is appealing the penalty, Kontos is eligible to play until his case is heard by Major League Baseball.

Paco Rodriguez (2-2) got two outs and Kenley Jansen worked the ninth for his fifth save.

The Dodgers’ third straight victory tied their longest winning streak this season, which came back in early April. This was their ninth attempt at matching it.

“We’ve been trying to get over this three-game hump for a while, so it was important for us to break through today,” A.J. Ellis said. “We just want to carry the momentum into tomorrow.”

Bumgarner (7-5) was charged with three runs - two earned - and five hits in seven-plus innings with five strikeouts in his 100th big league start. The 23-year-old left-hander engaged in another tense duel with Ryu Hyun-jin in a rematch of their April 2 meeting, when Bumgarner spoiled the Korean-born lefty’s major league debut with eight innings of two-hit ball and retired 18 consecutive batters during a 3-0 win at Dodger Stadium.

Ryu allowed a run, eight hits and four walks in six and two-thirds innings. He was lifted by manager Don Mattingly after Buster Posey reached second on a fly to right field that Puig was just about to catch when his backside made contact with the auxiliary scoreboard and the ball fell behind him. The play was originally ruled an error, then changed to a double by official scorer Don Hartack.

Ronald Belisario then came on and struck out Hunter Pence.

The Giants tied the game in the second inning with an RBI double inside third base by Andres Torres that scored Joaquin Arias from first base - but Arias strained his left hamstring on the play and came out of the game.

Crawford, who replaced Arias at shortstop, flied out with the bases loaded to end the third after Ryu got a visit from pitching coach Rick Honeycutt. AP