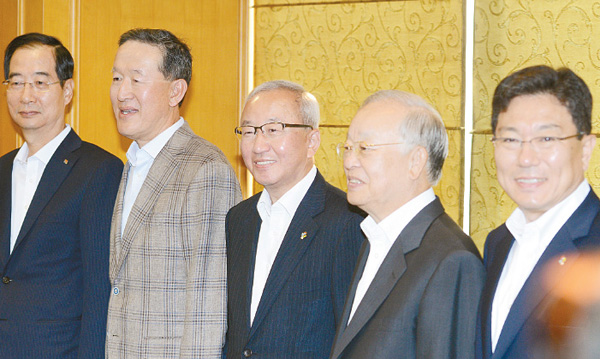 Leaders of Korea’s five major business lobby groups urged the government to intervene in the National Assembly’s moves to push through what they call “some excessive” economic democratization bills that they fear would squeeze corporate activities.

In a breakfast meeting with Finance Minister Hyun Oh-seok yesterday, Federation of Korean Industries Chairman Huh Chang-soo said the government should take the lead to improve the legislative environment so companies will increase investment.

“Companies are doing what they can do in response to the government’s efforts to create jobs,” Huh said at the Korea Federation of Banks building in central Seoul. “To help the economy recover, companies first need to regain confidence. If excessive legislative activities to overly restrict corporate activities improve, that will serve as an important milestone for corporate investment sentiment to rebound.”

“We understand the importance of the economic democratization, but it shouldn’t head toward a path that overly squeezes businesses,” Sohn said. “There needs a patient approach.”

Kim Ki-mun, chairman of the Korea Federation of Small and Medium Business, said SMEs also fear they may be victimized by the government’s moves to normalize the underground economy.

Yesterday’s meeting was the second time that Finance Minister Hyun sat down for talks with the five business leaders since April. He promised the government will be more considerate of businesses.

“The government will push forward the economic democratization and normalizing the underground economy based on its goals, but it will be more patient in terms of establishing and executing [related bills],” Hyun said. “The government is preparing for a second round of an investment stimulus plan by easing regulations.”

In a separate related matter, the Federation of Korean Industries’ business confidence survey of Korea’s top 600 companies fell to 90.7 in July from 97.2 in June, reflecting concern about the possibility the U.S. Federal Reserve will start to reduce its stimulus measures soon, China’s manufacturing industry, sluggish domestic consumption and the real estate acquisition tax cut that will expire Sunday.

The monthly index remained below 100 for the third straight month since registering 101.5 in April.

“Given that there’s no guarantee that the United States economy has entered a fundamental recovery pace, growing concerns that the Fed may scale back its quantitative easing may spill cold water on the global economic recovery,” said Kim Yong-ok, an official at the FKI. “The outlook for both exports and domestic consumption look gloomy due to China’s economic situation and sluggish private consumption in Korea. When the acquisition tax cut expires Sunday, this will lead to a real estate market slump and negatively affect domestic demand.”