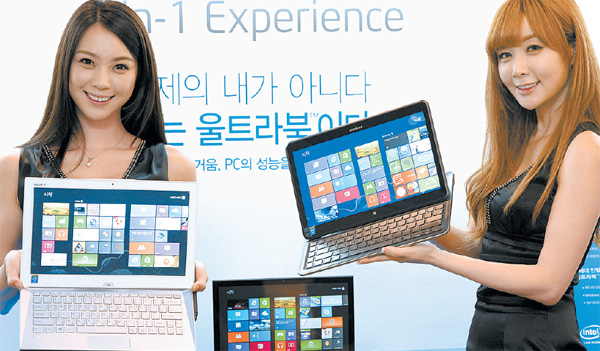 Models hold a laptop and a hybrid tablet PC that use Intel’s fourth-generation Core processor at a press conference yesterday at the JW Marriot Hotel in southern Seoul. [NEWSIS]

It was the third time in three years that the semiconductor maker diversified its product lineup as the boundary between personal computers and mobile devices increasingly blur.

The chip, which made a global debut at the Computex Taipei 2013 exhibition earlier this month, boasts twice the graphics capability of its predecessor and can lead to computer devices that are thinner, cooler and even fanless thanks to its low energy consumption, according to the Korean unit of the American semiconductor giant. It will also provide up to nine hours of battery life, or five nonstop hours of high-definition video playing.

The new processor is the first of its kind to be designed specifically for the so-called 2-in-1 ultrabook, a hybrid that can work as a clam-shell notebook computer or, by detaching the keyboard, a tablet.

An ultrabook is a class of light, ultra-slim laptop that Intel initially created in 2011 with high-end functions and long battery life.

“Ultrabook is not just a marketing term,” said Lee Hee-sung, chief executive of Intel Korea, at a press conference at a hotel in southern Seoul yesterday. “Ever since we created a brand-new computer category in 2011, devices have evolved in tandem with our chip’s evolution - also thanks to our business partners’ efforts.”

On the sidelines of the press event, Intel Korea set up a small exhibition of 11 new-generation products using the chip by such brands as Samsung Electronics, Sony, HP, Acer, Asos, Lenovo and MSi. The products are set to go on sale next month.

The new processor launch signals that Intel, which earns 85 percent of its revenue from PC sales, is now convinced the next-generation of computing will be mobile. While Intel holds a dominant market position in personal computers and servers, it falls behind Qualcomm and several others in smartphones and tablets. Smartphone shipments surged an estimated 44 percent last year whereas PC shipments fell 3.7 percent for the first annual decline in more than 10 years, according to IDC.

According to another market researcher, Strategy Analytics, last month, Qualcomm maintained its lead in the smartphone applications processor market in 2012 with 43 percent market share, followed by Apple, Samsung, Media Tek and Broadcom. Intel’s market share was less than 1 percent. The market grew 60 percent on year in 2012 to reach $12.9 billion.
Consumers’ shift to smartphones and tablets from PCs contributed to Intel’s third straight decline in quarterly revenue.