Iconic 1970s student activist continues to go his own way

Iconic 1970s student activist continues to go his own way 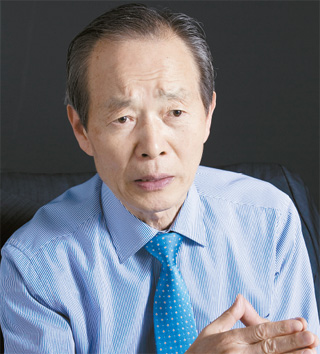 Well-known student activist Jang Ki-pyo never met Chun Tae-il. In mid-November 1970, Chun, 22, burned himself to death at Pyounghwa Market next to Cheonggye Stream, where he was working, to protest the dire working conditions of laborers at the market. Still, when Jang heard about Chun’s self-immolation, he went to Seoul St. Mary’s Hospital where he was welcomed by Chun’s mother, Lee So-seon, then scolded by her for arriving late. Lee told him her son had desperately wanted to be friends with a college student.

That was the first encounter between two people who would become leading figures in Korea’s progressive community. Lee became a national icon of the labor movement that was catalyzed by her son’s death, while Jang would make a name for himself in the democracy movement.

Jang, who was attending Seoul National University’s Department of Law, was so inspired by Chun’s death that he persuaded the dean to participate in the funeral. The elite school’s respectful treatment of Chun helped burnish the legacy of the labor activist.

“Ki-pyo is the first person I have met who wants to live truthfully and rightly. He is a lifelong teacher for me,” Lee said in her memoir.

Jang, head of the New Civilization Policy Research Institute, a think tank, also serves as head of the Chun Tae-il Foundation at the request of Lee.

That description of him would be echoed by many labor activists, who remember Jang as excelling in both theory and action, and he has influenced the direction of many social movements in Korea. His name is part and parcel of milestone events from the 1970s, including the massive protests following the kidnapping of former President Kim Dae-jung and the implementation of Yusin rule by President Park Chung Hee. He was imprisoned nine years and spent 12 to 13 more on the run.

Such experiences might have made him pro-North Korea like many other progressive figures have become, but Jang stands closer to the other end of the political spectrum. These days, he criticizes the North Korean regime and leader Kim Jung-un publicly and strongly. He believes North Korea is not going to abandon its nuclear ambitions and implores the South to help North Koreans stand up to the regime and persuade China, the North’s staunchest ally, to give up on Pyongyang.

Jang is equally critical of progressive groups in the South. Some would suspect he has changed, but Jang denied it during a conversation at the JoongAng Ilbo M&B Building early this month. During the interview spanning more than three hours, Jang, 67, said he sees his life as a success because he has not become a pigeonholed politician like many of his fellow student activists.

He was proud that he has kept the spirit of a progressive intellectual.

Q. You have expressed your critical view of North Korea’s nuclear ambitions and its regime. Do you think North Korea has a nuclear weapon?

But, no matter how we modernize our army, it is useless against a nuclear weapon. The power balance that guarantees the peace of the Korean peninsula has been broken, but we are not aware of it and that is our reality. The [South Korean] government officials are not that different.

Self-proclaimed progressives in the South have a strong proclivity towards the North. What do you think is the reason?

When college students took to the streets in the past, many supported them and followed them. That tradition is still alive. Likewise, when the Korean Confederation of Trade Unions [KCTU] claims something, people give a nod to it. The KCTU has actually become representative of those who have vested rights. Isn’t it difficult to become a regular worker at a large company? Those are the people the KCTU now represents. The same is true regarding North Korea. If someone raises a voice against North Korea, he is considered to be colluding with the conservative group. The left-leaning of the progressive groups in Korea are anachronistic.

Do you think China will support a South Korea-led unification?

China is in the process of solidifying its position as a G-2 with the United States, so it does not want to heighten tension in Northeast Asia, including on the Korean Peninsula. An opinion is forming in China that unification led by South Korea is a fundamental solution for getting rid of nuclear weapons in the North. Deng?Yuwen, who wrote a column in the Financial Times in February, titled, “China should abandon North Korea,” is an example. Deng, who is a deputy editor of Study Times, the journal of the Central Party School of the Communist Party of China, has the same idea as me.

I was pleasantly surprised and talked about him to some people around me and they bought me a plane ticket to Beijing. I sent him an e-mail and visited him in Beijing and had a talk for four hours. I asked him, “Are you saying these things for South Korea?” and he answered with a smile that he is doing it for China.

There are still not many people in China who agree with him. I arranged for Deng to lecture in Korea. Soon, we are going to publish a book that we have co-authored. I will work with him for unification. I want to create a unification forum and launch a national movement for unification.

You have carved out a unique progressive movement over the past 40 years. Why do you prefer doing it your own way?

Jang Ki-pyo is eccentric. I live my own life. The biggest and probably the last problem to solve in our era is that we don’t have a self. Even if we get the whole world, if there is no me, it’s nothing. I have come this far thanks to insight; you should give up desire. I am cautious of myself having desire. I am living in my own way. Former President Kim Dae-jung and former (Grand National Party) Chairman Lee Hoi-chang really wanted to lure me into politics. But if I had become a lawmaker and involved myself in the institutionalized political community, I would have become dull. No, I would have lost myself. Thinking of my fellow activists, they have become politicians who are no different from old politicians. Some are worse. Why would I involve myself in such politics?