Spy agency under fire for release of transcript

Spy agency under fire for release of transcript 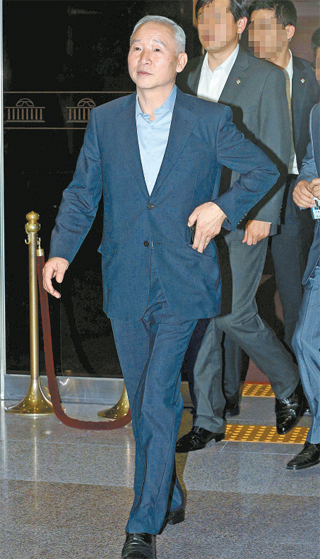 The director of the nation’s spy agency said yesterday that he sanctioned the declassification of a secret dialogue between the leaders of the two Koreas at a 2007 summit to defend the National Intelligence Service’s honor.

After declassifying the transcript on Monday, the NIS offered copies to members of the committee.

At a closed-door session of the committee, Nam faced fierce grilling from opposition lawmakers. The Democratic Party has said his move amounted to a “coup.”

“I sanctioned the declassification to protect the National Intelligence Service’s honor from the opposition party’s repeated attacks and distortions,” Nam was quoted as saying by DP representative Jung Chung-rae.

Asked when he first saw the document, Nam said he read it on Thursday for two to three hours and reviewed it a couple of times.

The DP lawmakers also asked if he made public the transcript with a determination to resign from his post. Nam made it clear he won’t step down.

At the committee meeting, the ruling and opposition lawmakers also engaged in a fiery debate over the lawfulness of Nam’s declassification. Nam testified that the details of the dialogue had already been exposed by lawmakers to the media so it no longer had value as a secret.

When the NIS gave copies of the transcript to the lawmakers on the Intelligence Committee Monday afternoon, the Democrats refused to receive what they called “illegal documents.”

The DP also said it wanted the release of the official transcript and an audio recording of the dialogue kept at the National Archives of Korea, not the NIS’s document, which they suspected was altered or manipulated in some way. According to the National Intelligence Service, it managed the transcript as a level-2 secret with a protection period of up to 15 years. Records classified as level-1 secrets are protected for 30 years.

While the NIS and the Saenuri Party said the NIS’s transcript was a public record that could be declassified and released after necessary review, the Democrats said it was a presidential record that requires two-thirds of the National Assembly’s agreement for disclosure.

Saenuri lawmakers and the NIS appeared to ground their opinion in the prosecution’s conclusion made earlier this year about the classification of the transcript.

The prosecution concluded in February that the transcript held by the NIS was a public record as a part of its investigation into the veracity of a Saenuri lawmakers’ claim that Roh disavowed the Northern Limit Line at the summit. After Representative Chung Moon-hun said his claim was based on the NIS transcript, the prosecutors investigated the document and concluded that it was a public record. One of the South Korean officials who attended the 2007 summit made an audio recording of the conversation between Roh and Kim and the NIS created the transcript from it.

The NIS said since its copy of the transcript was a production of its own, there is nothing illegal in declassifying the document. It said it took all necessary steps to lower the classification level, decide the release and obtain Nam’s approval.

The DP, however, maintained the act was unlawful.

“The law governing public records said a review should take place every five years to decide whether declassified documents can be released or not,” said Representative Park Beom-kye. “Even if the transcript was declassified, it is against the law to release it [without a review].”

DP Chairman Kim Han-gill said the NIS had lost its reason and damaged the national interest.

Representative Kim Jae-won of the Saenuri Party, however, said there was nothing wrong with the NIS’s move. “The Democrats can express their rage politically and emotionally, but legally there is no problem,” Kim said.

“The talks inevitably have to include sensitive matters that require secrecy. The release of the transcript could set a bad precedent for other foreign leaders’ summits with our president in the future.”

The Democratic Party will push for the dismissal of Nam. “We want Nam to be sacked immediately,” said Representative Kim Kwan-young, spokesman of the DP.