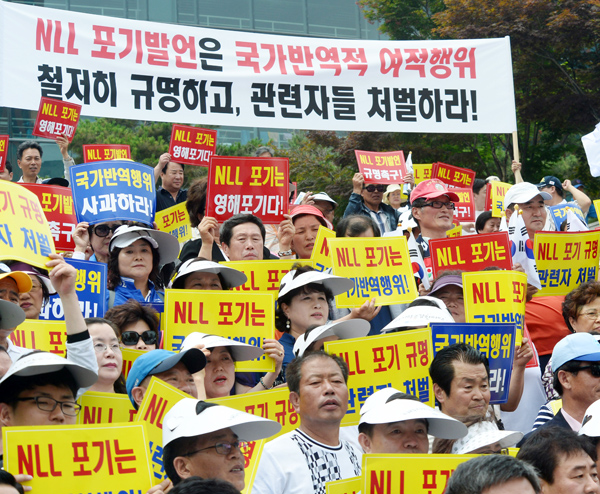 The unprecedented declassification of a secret transcript of a meeting at the 2007 inter-Korean summit in Pyongyang by Seoul’s spy agency triggered intense debates between conservatives and liberals over whether the action was right - and what exactly was said on the transcript.

According to the 103-page transcript that ruling Saenuri Party representatives received from the National Intelligence Service and released to local media on Monday, former South Korean President Roh Moo-hyun told his Northern counterpart Kim Jong-il during a closed-door meeting on the sidelines of the summit that he didn’t accept the Northern Limit Line, or NLL, the western sea border between North and South Korea since the end of the 1950-53 Korean War.

But because of the ambiguity of Roh’s remarks and the language he employed, the liberal and conservatives are interpreting them very differently.

The NLL was drawn up by the U.S. after the Korean War. North Korea has never accepted the border, and it has been a source of conflict leading to several deadly naval clashes. 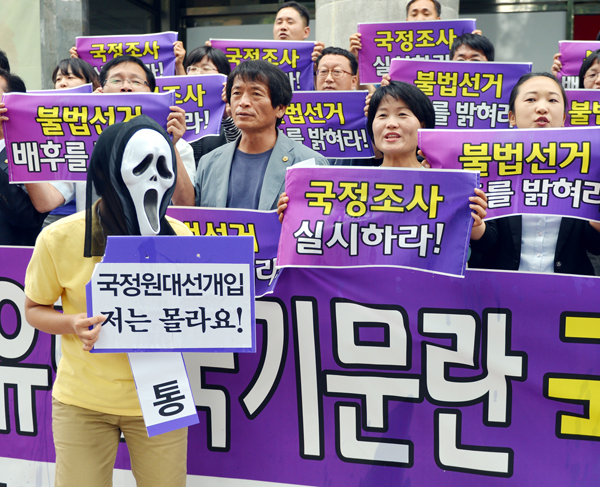 Lawmakers and members of the opposition Unified Progressive Party, a far-left political party, hold a press meeting in front of Saenuri Party’s Gwangju branch in South Jeolla yesterday urging the legislature to investigate the National Intelligence Service’s alleged attempt to sway public opinion ahead of the December 2012 presidential election. [NEWSIS]

At the morning session, North Korea’s Kim proposed to create a joint fishery zone to end all territorial disputes around the sea border.

“How about creating a joint fishery district, or a peaceful fishery zone, in waters between the military line we claim and the limit line the South claims?” Kim asked.

That would put the five frontline South Korean islands including Baenyeong and Yeonpyeong in the joint zone.

Roh responded he had “lots of interest in the matter” and he “understood you have a strong will to resolve this matter.”

Roh continued: “The sea of peace, and the joint fishery zone, which you proposed .?.?. I want to do that right in the Southern side and solve (all the disputes).”

In the afternoon session, Roh returned to the issue of the NLL when he was discussing boosting inter-Korean business. He said, “The NLL is the biggest problem” in inter-Korean relations. “Regarding this matter, I have the same perception with you, Mr. Kim. The NLL should be changed.

“But people who don’t know really understand the details on this matter are too sensitive, and their voices are loud indeed,” he said. “So what I want to propose is to cover the current military map with a large map of peace and economics.

“If we launch the zone of peace and cooperation in the Yellow Sea and agree on resolving all matters regarding peace and joint prosperity through the zone, as well as continuing working-level negotiations necessary for that, all the problems regarding the NLL would be resolved within my term,” Roh said.

At another point in the conversation, Roh said, “There is no legal or logical basis” to the legitimacy of the NLL, which conservatives see as a disavowal. But he followed that by saying the border “is actually effective,” which liberals see as a defense of it.

The opposition Democratic Party, a descendent of Roh’s Uri Party, denied that Roh disavowed the border.

“There was no term ‘disavowal of NLL’ on any page of the transcript,” Park Yong-jin, a spokesman of the DP, said yesterday at a press meeting. “Rather, we confirmed the late president’s efforts to turn the Yellow Sea into a region of peace.”

“The DP will seek legal and political responsibility for all illegal acts,” he continued. “In the name of the people, we demand Representative Suh Sang-kee and Representative Chung Moon-hun from the Saenuri Party step down from their legislative seats immediately.” Chung and Suh had accused Roh of disavowing the NLL before the transcript was declassified.

Saenuri lawmakers say Roh rejected the border because he agreed to create a joint area in southern waters.

“Former president Roh Moo-hyun actually made the shocking suggestion to hand over territorial sovereignty to the North Korean regime,” Kim Gi-hyeon, a deputy policy maker of the Saenuri Party, said at a party meeting yesterday. “What about fallen soldiers who dedicated their lives to protecting the NLL?”

Civic activists clashed over the spy agency’s declassification of a state secret.

The Korea Freedom Federation, a far-right civic group based in Seoul, convened a rally in front of Seoul Station yesterday to urge the government to “launch a thorough probe” into the declassification.

“We think it’s fortunate that the transcript was opened,” members of the federation said in their statement. “The government and politicians should get to the bottom of whether there were indeed remarks disavowing the NLL and why the president made such comments.”

Liberals suspect the state-run spy agency is trying to deflect attention from an investigation into whether the NIS orchestrated an online campaign against the challenger to President Park Geun-hye ahead of the December 2012 presidential election.

“It’s a typical political plot to divert public attention from the alleged meddling of the NIS in the presidential campaign,” members of the Korea Alliance For Progressive Movement said at a rally yesterday.

President Park yesterday talked about the importance of the NLL at a cabinet meeting.

“We must not forget that many youngsters defended our NLL with their blood and lives,” Park said. “All the cabinet members and I, as the president, must work harder so that the sacrifices of our patriots will not have been in vain.”

Park’s remarks came as the country commemorated the 63rd anniversary of the start of the Korean War yesterday. “We won’t tolerate any attempts to hinder the liberal democracy that we defended with our blood and to distort the history of the Republic of Korea,” Park said. “That is a sin before history and the people.”