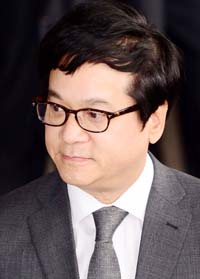 Prosecutors yesterday summoned CJ Group Chairman Lee Jay-hyun about a month after they raided the group’s headquarters and offices of affiliated companies in an investigation into alleged overseas slush funds and tax evasion.

Lee is the first conglomerate chief to be summoned as a suspect by the Park Geun-hye administration.

At 9:35 a.m., Lee appeared before the Seoul Central Prosecutors’ Office in Seocho-dong, central Seoul. As soon as he got out of his black Hyundai Equus sedan, he was surrounded by about 70 reporters.

“I apologize to the nation for everything [that occurred in the past month],” Lee told reporters before he entered the prosecutors’ office.

When reporters asked whether he gave the direct orders for the alleged slush fund creation and tax evasion, he hesitated before saying, “I will tell everything I know to the prosecution.”

About 10 high-ranking officials of CJ, including Lee Chae-wook, vice-chairman of CJ Korea Express and Kim Chul-ha, chairman of CJ CheilJedang, escorted the chief into the prosecutors’ office.

The special investigation unit of the Central District Prosecutors’ Office in charge of the case said Lee has multiple allegations totaling about 500 billion won ($431 million) regarding overseas slush funds and tax evasions, but they said they will focus on three core violations.

The prosecution believes that Lee, the head of the country’s 14th-largest conglomerate, has dodged about 50 to 60 billion won in taxes by purchasing the group’s stock and selling the shares at a 30-40 percent profit with hundreds of billions of won in slush funds he created through shell companies, including Chishan Development and Topridge that he established on the Virgin Islands.

The prosecution also thinks that Lee has embezzled about 60 billion won of CJ’s funds since 1998 by creating fake records for branch offices in Singapore and Hong Kong, detailing sales of raw materials and goods to the company in Korea with CJ, then issuing fake invoices for the transactions.

Lee purchased about 200 to 300 pieces of art for about 110 billion won using the names of dozens of CJ employees to launder the illegally created funds, according to the prosecution.

Allegedly, Lee purchased the art from Hong Song-won, the head of Gallery Seomi, an art gallery in Cheongdam-dong, southern Seoul, who is under investigation for allegedly evading about 3.5 billion won in taxes.

The last violation that the prosecution wants to investigate is whether Lee caused CJ losses of about 35 billion won.

It believes that Lee incurred about 35 billion won in losses to CJ’s corporation in Japan by putting up a building that is owned by the Japan office as collateral to borrow about 44 billion won from Shinhan Bank’s Tokyo branch to purchase two buildings in Akasaka, Tokyo.

A charge of breach of trust can be applied if their findings turn out to be true. Sources in the prosecution said that they have already secured evidence and testimony that can prove Lee’s violations and yesterday’s questioning was only a step to confirm the allegations.

Shin Bong-soo, 42, a prosecutor with the special investigation unit, questioned Lee in a small interrogation room on the 11th floor of the prosecution’s office, and attorney Lee Byeong-seok from the high profile law firm Kim & Chang represented Lee.

The prosecution will likely file a warrant to arrest Lee as early as this weekend.

“We are not considering summoning Lee’s other family members [including Lee Mie-kyung] for now.”

Mie-kyung is Lee’s sister and a vice chairwoman of CJ.

As the prosecution is confident in proving most of Lee’s allegations, the question is now how strict the punishment will be.

In February, a court sentenced Kwon Hyuk, Chairman of Cido Shipping, to four years in prison for evading nearly 220 billion won in taxes.

In December 2011, Park Yeon-cha, former chairman of Taekwang Industrial, was sentenced to two and a half years in prison by the Supreme Court for not paying 28.6 billion won in taxes.

The prosecution said that the revised law, which strengthened the level of punishment and will go into effect from July 1, could see Lee receiving up to 12 years in prison for evading more than 20 billion won in taxes.

“If the prosecution indicts Lee after July 1, he will be impacted by the revised law,” a spokesman of a local Seoul court said.