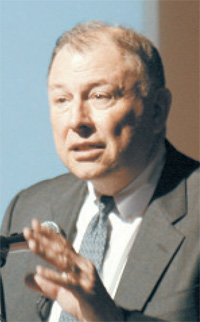 Michael Gehret, associate director of the Institute for Advanced Study (IAS) in the United States, visited Korea to deliver a speech at Kyunghee University yesterday in order to present the vision, governance and fundraising tactics of the prominent research institute.

Known as a tactical fundraiser as well as a public relations expert, Gehret started off his presentation by sharing the key vision and principals of the IAS.

“The IAS is an independent institution which puts scholars’ intellectual curiosity first. We grant them full freedom to get them to follow their intellectual pursuits,” Gehret said.

“The visiting members and permanent professors would not feel limited or pressured by the immediacy of application,” the associate director said.

Gehret also explained the composition of the faculties at the IAS.

“Around 170 members, from over 30 different countries, each year visit our institute. Sixty percent are from outside the U.S., ranging from young postdoctoral fellows to emeritus professors. Most stay one year, in natural sciences 2-3 years, some up to 5 years,” he said.

Past faculty of the institute include Albert Einstein, who remained at the institute until his death in 1955, and distinguished scientists and scholars such as Kurt Godel, J. Robert Oppenheimer, Erwin Panofsky, Hetty Goldman, Homer A. Thompson, John von Neumann, George Kennan, Hermann Weyl and Clifford Geertz.

Prior to joining the Princeton, New Jersey-based institution, Gehret served as senior vice president for resources and planning for the Chicago Symphony Orchestra (CSO) for nearly a decade.

In that role, he was responsible for annual fundraising, special underwriting, endowment development and government grants as well as the orchestra’s marketing, communications and ticket sales programs.

Under his direction, the orchestra achieved a successful capital campaign, raising more than $112 million for the renovation of the Orchestra Hall and construction of the Symphony Center, which opened in October 1997.

His responsibility of the current position basically remains the same but his job has changed a little.

“I’ve been doing the same job in both institutions by fundraising and being involved in public relations. But the difference is donors to the orchestra are local while those for the IAS are from different regions, cities and countries. The majority of our current donors are in New York,” said the associate director.

The associate director also shared his experience of leading a series of successful fund-raising campaigns in the education organization.

“We look for a particular kind of individual when looking for ‘major’ donors. Major donors mean those who can donate up to a million dollars. In the United States, it’s easy to find out who are able to do so by referring to magazines like Forbes,” he said.

“Among those rich people, my role is to find someone who appreciates the value of research and advancing knowledge,” he noted.

Asked about how he manages to keep the donors connected and involved, he advised to invite them to the institution.