Park has chance to open season 3-for-3 in majors

Park has chance to open season 3-for-3 in majors 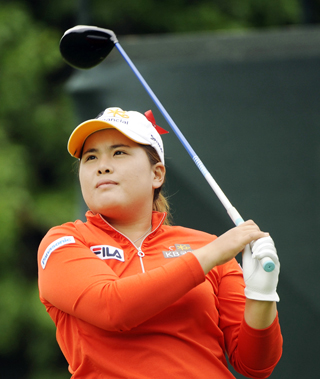 The toughest test in women’s golf would figure to be a piece of cake for the No. 1 player in the world.

She already had six wins, and the LPGA Tour season was barely at the halfway point. She stamped her dominance by winning the first two majors of the year. The gap between her and the next best player was even larger than what Tiger Woods enjoyed in men’s golf. Her swing was reliable. And she had the experience as a past U.S. Women’s Open champion. If she had a weakness, it wasn’t apparent.

But it didn’t work out that way in 2005 for Annika Sorenstam. She tried to ignore a month of hype only for jangled nerves to join her on the first tee at Cherry Hills. She was behind from the opening round, and the harder she tried, the farther behind she fell.

“It was a lot of pressure,” Sorenstam said last week about her Grand Slam bid. “I wanted to not necessarily ignore it, but I was trying to not let it get to me. I wanted to just focus. It’s another major. It’s the U.S. Open, and at the time, I had won two before. And I thought, ‘I can do this.’ ”

She can appreciate better than most what Park In-bee faces this week.

The 24-year-old Korean didn’t win the first two majors as convincingly as Sorenstam did in 2005, but she won them. Park is coming off back-to-back wins, including the LPGA Championship in a playoff, to widen her lead at No. 1 in the world. She won the Women’s Open just five years ago at Interlachen.

“I’m looking forward to seeing how In-bee handles this,” Sorenstam said. “She has the major experience and she’s the No. 1 player in the world, so she’s not necessarily brand new in this role. .?.?. We’ll see how she handles Sebonack and the conditions that await.”

Sorenstam didn’t make it clear if she was talking about external conditions - such as wind coming off Atlantic waters on Long Island - or whatever emotions are roiling inside Park.

The U.S. Women’s Open starts Thursday at Sebonack Golf Club, and Park is the latest to challenge history.

Sorenstam was only the most recent player who tried - and failed - to win three straight majors to start the season.

Woods had a chance in 2002 until he was blown away by the wind, cold and rain of Muirfield on Saturday of the British Open. Pat Bradley was going for three straight in 1986, but she shot 76 in the first round of the U.S. Women’s Open and never caught up. Jack Nicklaus was on the verge of winning three straight majors in 1972 until Lee Trevino beat him at Muirfield. Arnold Palmer, who created the modern version of the Grand Slam in 1960, lost out by a shot to Kel Nagle that year at St. Andrews.

The last player to start the season by winning three straight majors was Babe Zaharias in 1950, back when the LPGA Tour only had three majors. Ben Hogan won all three he could play in 1953, when the PGA Championship was held at the same time as British Open qualifying.

Sorenstam said of Park, “I’ve been in her shoes,” but only as it relates to her bid to win three straight majors. Sorenstam was going after the Grand Slam in 2005. The LPGA Tour now counts the Evian Masters, which gives it five majors. The trouble is, a grand slam only scores four runs. Or as Jeff Sluman so famously said in 2003, “When you go to Denny’s and order the Grand Slam breakfast, they don’t give you five things, do they? They give you four.”

What do you call winning five majors in one year? That’s a question Park would love to have someone answer.

The next stop is Sebonack, whether nothing figures to be easy - not the course, not the competition, not the pressure.

“I think there is no way that you won’t feel the pressure,” Park said Tuesday. “Because you will always feel the pressure. But it’s just the more you experience it, you just feel it a little less and less over the time. Now when I’m in the position where I am, and when I’m in the winning position - and I’ve been there a lot - it’s just knowing what I have to do. I think that’s been a big help for me.”

A bigger help is how she’s playing.

“This is the best I’m playing in my career so far,” Park said. “I’m trying to keep this going.”