Serving bingsu with a twist

Serving bingsu with a twist 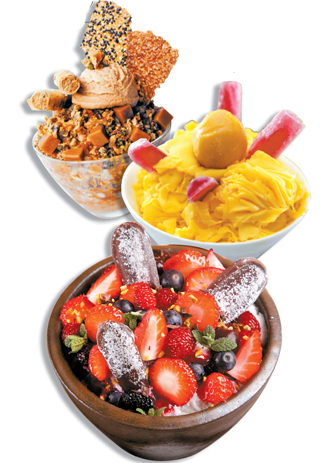 Patbingsu, or shaved ice flakes topped with boiled adzuki beans and assorted toppings, was once considered a cheap and junky summer treat, but the dish has been moving up from establishments with sticky, plastic tables and greasy spoons to five-star hotel lounges over the past two or three years.

Of course, patbingsu has been around for decades, available everywhere from street stands to upscale restaurants, but nobody paid much attention.

Since the process of boiling adzuki beans, the main ingredient, is quite time-consuming, most of the treats were served with canned red beans, ready-made rice cake cubes, jelly and syrup. Creativity wasn’t valued.

However, trendy restaurants eventually took note of surging demand and came up with unique variations. Some use shaved ice flakes with exotic fruit or Oreo cookies instead of beans. Others pile the shaved ice flakes up to 30 centimeters (11.81 inches) high or toil to prepare adzuki beans and rice cakes by hand.

And the efforts seem to have paid off. People now line up for hours to get bingsu at a few trendy places.

Of the many five-star hotels, Park Hyatt Seoul, located in Daechi-dong, southern Seoul, was quick to read the trend.

“We first came up with two bingsu using omija [five-flavored berry] and sweet pumpkin three years ago but feedback wasn’t good. They said the ice flakes were way too coarse,” said Janet Lim, a public relations official of the hotel.

After that, the hotel replaced its ice maker twice and finally settled on one that was manufactured in Japan.

It also paid attention to containers.

Onggi earthenware is refrigerated in advance so that it keeps its contents cool for a long period of time.

After a couple of trials, the hotel came up with “Berry Bingsu,” made from shaved milk ice flakes without pat but with fresh berries boiled in honey and dark chocolate chunks. (See review below).

The hearty bingsu became an instant hit, and the specialty has become a sign of summer at the Park Hyatt Seoul.

Berry Bingsu brought more customers to The Lounge, which offers a wide range of meals and beverages from champagne to afternoon tea, and even changed the environment. Two-thirds or more of today’s customers can be seen scarfing down bingsu. Some even bundle up in blankets while enjoying the treat.

Rumor has it that the hotel has earned hundreds of millions of won thanks to the Berry Bingsu alone, exceeding all expectations.

Prompted by the success of the Park Hyatt Seoul, other hotels also joined the fray to create their own premium bingsu dishes.

The InterContinental Seoul COEX, just across from the Park Hyatt, used to offer classic patbingsu. But that changed in May when chefs replaced their ice maker to smooth out the texture of the ice flakes.

“Since the particles of ice have become smaller, we can stack them higher than before and they don’t melt as they used to,” said Carrie Yoon, a PR official at the hotel.

After months of preparation, the hotel came up with two unique bingsu: one called Kurumba Bingsu and the other Mango Rose Sparkling Bingsu.

Too much coconut could make the dessert too rich, instead of cool and refreshing, but the balance between coconut-flavored shaved ice flakes, jelly and cookies is just right.

Mango Rose Sparkling Bingsu, nicknamed “X-Rated bingsu” by the hotel, also shows how the hotel is trying to add a competitive edge to its mango bingsu, which is one of the most common flavors. Four finger-sized frozen sparkling wine bars are stuck inside.

The combination of mango and rose sparkling wine looks odd, but the bitter taste of the wine goes well with the sweet mango.

Other hotels are also endeavoring to make their own signature bingsu. Hotel Shilla Seoul has already seen success with its “Apple Mango Bingsu” that uses one-and-a-half Jeju Island-apple mangoes for each serving.

The Plaza Hotel Seoul has earned rave reviews for its Caramel Bingsu, which is served with rich homemade caramel syrup and fresh caramel candies.