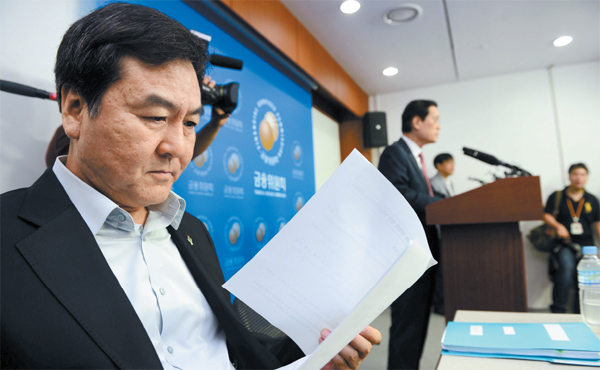 Financial Services Commission Chairman Shin Je-yoon, left, flips through sales plans for Woori Financial Group while waiting for his turn at a press conference yesterday at the agency’s headquarters in downtown Seoul. [NEWSIS]

The government will start the process of privatizing Woori Financial Group next month by breaking the country’s largest financial holding company into three groups with the goal to complete the sale by next year. It will be the government’s fourth attempt to sell Woori Financial after failing three times in the previous administration due to a lack of investor sentiment and the sluggish economy.

“The privatization plan we’ve come up with this time is one that aims to return [Woori Financial] to the market as early as possible based on the direction of what the market wants,” said Shin Je-yoon, chairman of the Financial Services Commission, yesterday in a press conference at FSC headquarters in central Seoul. “We thought [Woori Financial] should be given back to the market to boost the competitiveness of our financial industry.”

The FSC announced details of its privatization plan for Woori Financial yesterday after a meeting of the Public Fund Oversight Committee. According to the plan, 14 affiliates of Woori Financial will be split into three groups: regional banks, brokerage units and Woori Bank.

Woori Financial Group, with 14 affiliates, is the country’s largest financial holding company with 325.7 trillion won ($282.4 billion) in assets at the end of 2012. Last year, Woori Financial Group had 12 affiliates, but Woori Card and Kumho Investment Bank were added. The state-run Korea Deposit Insurance Corporation holds nearly 57 percent of shares in Woori Financial, while the National Pension Service owns 5 percent and others, including the Capital Group, hold 38 percent. The government’s 57 percent ownership stake is estimated to be worth 5.5 trillion won based on the closing stock price (11,950 won) at the end of May. 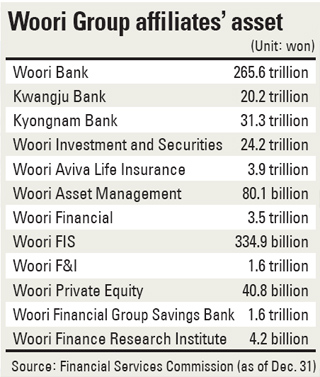 There have been concerns raised by the Korean Financial Industry Union that once regional banks affiliated with Woori Financial Group are available for purchase, major financial institutions are likely to buy them, which only would benefit the country’s big financial groups. The industry union also has argued that regional capital should be invested in buying Kyongnam Bank and Kwangju Bank rather than simply selling the banks to the highest bidders.

Yesterday, however, Shin reaffirmed that “the principle based on [selecting the bidder with the] highest price will be considerably important” in the bidding process for regional banks.

As for Woori Financial Group’s six brokerage affiliates - including Woori Investment and Securities, Woori Asset Management and Woori Aviva Life Insurance - the group will be in charge of selling them simultaneously, either individually or in groups. The remaining six affiliates, including flagship Woori Bank, Woori Card and Woori Finance Research Institute, will be sold by the Korea Deposit Insurance Corporation after it issues a public sales notice in January.

“Affiliates including securities companies that eventually fail to be sold will be added to the Woori Bank group,” said Nam Sang-koo, chairman of the Public Fund Oversight Committee.

The committee plans to put the regional banks up for sale on July 15, while bidding for Woori Financial Group’s brokerage affiliates will begin in August.

The FSC said in a statement that the privatization schedule it proposed yesterday is not a “definite deadline,” but a “proposed timeline.”

Privatization of Woori Financial Group has long been an unresolved task for government. In recent years, the government has been trying to recoup public funds invested to save four banks (Hanvit, Peace, Kwangju and Kyongnam) and Hanaro Investment Banking from going bankrupt in the wake of the 1997 Asian financial crisis by merging them into one institution. It was Korea’s first financial holding company with five affiliates when it started. A total of 12.8 trillion won was invested by the government in 2001 and as of end of May, the government has recouped 5.7 trillion won, or 45 percent of its investment.

In response to concerns that it might not be a good time to sell, FSC Chairman Shin said the principle is to put Woori Financial Group on the market as soon as possible.

“The [whole sales procedure] will be completed at the end of next year, so we cannot predict how the external environment will have changed by then,” said Shin, “But the principle is to return it to the market fast.”