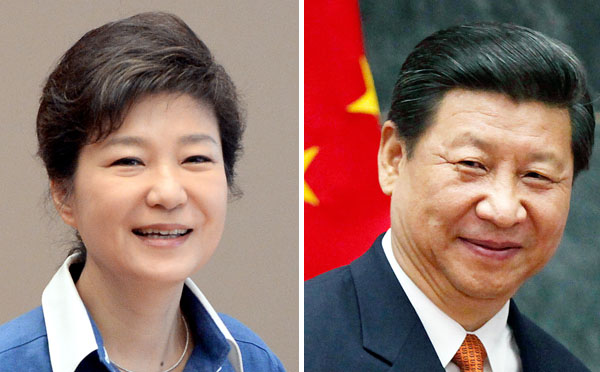 President Park Geun-hye is scheduled to leave for Beijing today for a four-day trip intended to deepen her relationship with the Chinese leadership.

During her state visit to China, Park will meet with the three most powerful men in the country: President Xi Jinping, Premier Li Keqiang and Zhang Dejiang, chairman of the Standing Committee of the National People’s Congress. The Blue House said the three meetings demonstrate Beijing’s special regard for Park.

According to Ju Chul-ki, presidential senior secretary for foreign affairs and security, Park’s trip to China was described as a “journey of hearts and trust.”

“It reflects Park’s intention to strengthen her trust and ties with the Chinese leadership to reinforce the substance of the Korea-China relationship,” Ju said Tuesday. “Last year marked the 20th anniversary of the two countries’ diplomatic ties and Park wants to add further substance to the ties, which have been elevated to a strategic cooperative partnership.

“We hope the summit will serve as an opportunity to strengthen coordination of North Korea policy with China to end North Korea’s nuclear arms programs,” Ju said, “And seek Beijing’s understanding of the Park administration’s trust-building process with North Korea and the Northeast Asia peace initiative.”

Economic cooperation, including work toward a Korea-China free trade agreement, will also be an important topic for the visit, he said.

Park will have a summit with Xi today, her first day in Beijing, and the two leaders are to adopt a joint communique to elaborate their vision of the two countries’ relationship. A series of agreements will be signed between the two governments following the summit and a state dinner hosted by Xi is also planned.

Expectations are high in Seoul for the summit to deliver a breakthrough in the logjam over North Korea’s nuclear program. China is the largest benefactor and strongest ally of North Korea and the international community has hoped Beijing would exert more pressure on Pyongyang to resolve the issue.

The joint communique to be adopted after the Park-Xi summit is expected to address the nuclear issue and the two governments are having last-minute discussions on its wording, a Blue House source said. “It’s too early to say what the wording is, but it’s important that North Korea’s attitude has changed rapidly ahead of Park’s visit to China,” he said.

China has shown deeper concern about progress in North Korea’s nuclear weapons program since Pyongyang went ahead with a third nuclear test in February despite Beijing’s warning not to. Since then, China has stepped up its participation in implementing sanctions against the North. When Xi met with U.S. President Barack Obama earlier this month, he made it clear that China will not tolerate a nuclear-armed North Korea.

Another Blue House source, however, warned against too much optimism because China has avoided any direct expression urging North Korea to give up its nuclear weapons in the past eight joint statements adopted by the leaders of Beijing and Seoul.

“There is a saying that China’s foreign policy changes are like turning an aircraft carrier, not a speed boat,” he said. “It takes a significant amount of time to reshape Beijing’s approach toward Pyongyang. But once it sets the course, the direction will continue for some time.”

Tomorrow, Park will meet with Li and Zhang in separate meetings.

Earlier in the day, she will have a breakfast meeting with dozens of Korean businessmen accompanying her on the trip. According to the Blue House and the Korea Chamber of Commerce and Industry, a 71-member economic delegation will join the China trip. She will also give a speech at a forum of the two countries’ entrepreneurs tomorrow.

On Saturday, Park will give a speech at a university in Beijing. The speech is focused on the two countries’ “journey of trust” for the next 20 years. A source at the Blue House said Park will give some parts of the speech in Chinese and take questions from students.

Park will also tour a South Korean company operating in Beijing and leave for Xi’an later in the day. The city is a hub in China’s western region and the political hometown of Chinese President Xi.

On Sunday, Park will tour cultural sites and a Korean company operating in Xi’an and return home.

Park will be accompanied by 10 official delegates including Foreign Minister Yun Byung-se and Trade, Industry and Energy Minister Yoon Sang-jick.

Meanwhile, a Blue House official told the JoongAng Ilbo Tuesday that the presidential office has prepared 50 staffers who will participate in Park’s trip to China in order to heighten their discipline. Park’s maiden presidential trip to the United States in May was overshadowed by a sexual assault scandal involving her then-spokesman Yoon Chang-jung.

When Washington police opened an investigation into a complaint of sexual assault, Yoon abruptly flew back to Korea in the middle of the trip. He was later fired.

According to the source, the presidential entourage is banned from receiving foot massages and visiting bars. They are also not allowed to drink heavily.