Experts on China dare to dream

Experts on China dare to dream 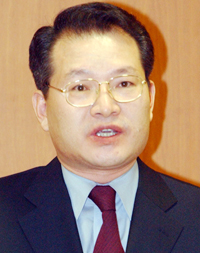 “Chinese President Xi Jinping speaks of a ‘China dream.’ We, too, have a ‘Korea dream,’ of peace, prosperity and unification in the Korean Peninsula,” asserted a panel of China experts ahead of President Park Geun-hye’s first Beijing summit today. “And gathering together the China dream and the Korea dream, we need to propose to build a ‘Northeast Asia dream.’?”

Among the experts was Seok Tong-youn, secretary general of the Northeast Asia History Foundation. An interview with Seouk was featured in China’s Global Times, sister paper of the state-run People’s Daily. It was a rare move for Chinese state media that was seen as an attempt to create a sense of camaraderie between the two nations ahead of Park’s visit.

“The three countries - South Korea, China and Japan - need to jointly compile modern and contemporary history so that following generations can study it,” said Seok in the Global Times. “And these nations have to take to heart that we now have a partner relationship.”

“Trust is Park Geun-hye’s key word and the government’s key word. As we reached 20 years of bilateral relations between Korea and China and begin a new 20 years, there is a need to include in the joint statement transitional characteristics,” Seok said during a roundtable last Friday at the J-China Forum hosted by the JoongAng China Institute, an in-house research division of the JoongAng Ilbo.

The topic of the forum was “Things President Park Geun-hye has to keep in mind for her China visit.”

Lee Sang-hyun, director of the Security Studies Program at Sejong Institute, pointed out deficiencies in leadership as China deals with internal issues, Japan a rightward shift in politics and the United States a strategic standstill, saying, “President Park has to take this golden opportunity to show confidence in her dialogue with President Xi.”

The hottest issue remains reunification of the Korean Peninsula and at the crux of problem is cooperation between South Korea and China.

China is in the midst of hotly discussing the Korea issue, said Kim Heung-kyu, a politics professor at Sungshin Women’s University. “After Xi Jinping’s system came into place, China has been establishing its identity, moving from a newly industrialized country to that of a world power, and is in the midst of forming international, regional and Korean Peninsula policies suitable to those of superpower,” said Kim.

Thus, how carefully a joint strategic cooperation system is constructed to deal with the issue depends on the success of the three-day Korea-China summit, which concludes Saturday.

“China is continuously concerned that North Korea’s denuclearization is seen as a problem with the North Korean government,” said Kim. “President Park has to make clear that she does not want the collapse of North Korea.”

He said Beijing’s view of Pyongyang has shifted from that of a “strategic asset” to a “strategic trap,” and because of the relationship between China and the United States, North Korea gains leverage through its provocations.

Experts at the forum recommended “Journey of Trust” as a theme for Park’s China visit.

“Only through an amalgam of economy and security will the Korean Peninsula problem improve, leading to economic cooperation in Northeast Asia,” said Oh Seung-yul, Chinese studies professor at Hankuk University of Foreign Studies.