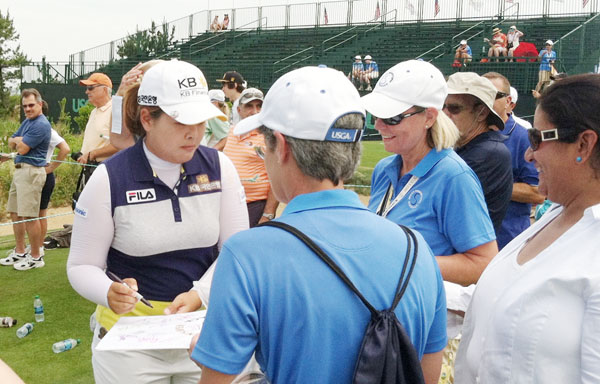 Park In-bee signs autographs during a practice round for the U.S. Women’s Open at Sebonack Golf Club on Wednesday in Southampton, New York. [NEWSIS]

SOUTHAMPTON, New York - Park In-bee was 19 when she became the youngest player to win the U.S. Women’s Open, not very experienced at golf or at life.

She had much to figure out after a victory that hinted at so much promise, and it took more than four years of sagging under pressure and tinkering with her swing before the Korean earned another title.

The talented teen from 2008 has turned into a dominant veteran, the favorite heading into this week’s U.S. Women’s Open. Ranked No. 1, Park has won the first two majors of the year and her last two tournaments.

And she’s at peace with her game and her world.

“The weeks that I’ve been having recently, I don’t think I really need to think about golf outside the golf course,” Park said. “I’m just very happy when I’m off the golf course.”

At Sebonack Golf Club on Long Island, Park will seek to make history. When there have been at least four majors in a season, no player has ever won the first three of the year.

Park has relied on her clutch putting to win five times already this season and seven of her past 23 starts dating to last year. After winning the 2008 U.S. Women’s Open, she went more than four years before her next victory at the Evian Masters last July.

“When you don’t know how to handle the pressure, it’s not a good feeling at all,” she said. “Your heart’s pumping; you think all the negative things.”

Park’s fiance travels with her on tour, and she has friendly rivals such as defending U.S. Women’s Open champion Choi Na-yeon.

After Park won the LPGA Championship earlier this month, the two Koreans took some time off at Choi’s home in Orlando. They made kimchi soup and Korean barbecue, played tennis and went bowling.

Park returned to competition to take another title at the NW Arkansas Championship last week. Mickey Wright in 1964 is the only player to win the U.S. Women’s Open after victories in her previous two tournaments. AP