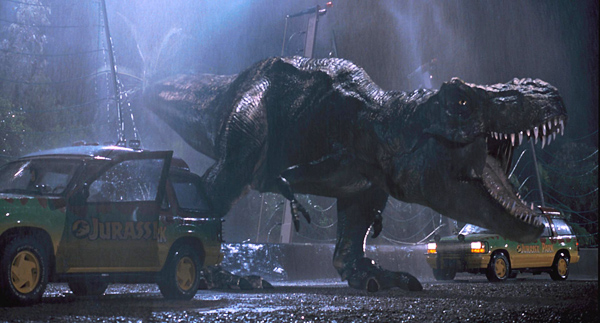 Cinemagoers will be treated to an even more intense experience when they see “Jurassic Park” in 3-D. Provided by UPI Korea

In the 90s, the world got a taste of what it’d be like to roam with dinosaurs, thanks to Steven Spielberg’s “Jurassic Park.” This time, with the re-release of the classic in 3-D, old faithfuls and new fans will be able to feel the roar of a Tyrannosaurus rex right up in their face.

Twenty years ago Spielberg took on an ambitious project; a challenge even by today’s standards. Nevertheless, the famed filmmaker managed to win over the world with his hit that grossed $900 million dollars and became the most successful film of the time.

Now in 3-D, viewers will be spared no mercy as they encounter body parts torn to pieces at the jaws and claws of the prehistoric creatures let loose on a theme park in its trial stage.

For those who’ve watched the original, they will be reminded just why this film is a classic, and why of all the sequels that followed, nothing could top the first. But more than anything - the story line, the philosophical debate, the A-list cast - it is the film’s action sequences in 3-D that will keep the viewers wondering, “Just how did they do that?”

And Spielberg would have you know that it was no walk in the park. The converting process undertaken by Stereo D took some 700 creative minds nine months. Ever the perfectionist, Spielberg interviewed countless special effects companies before appointing Stereo D the honor. (The company also converted “Titanic.”)

It said that the most challenging aspect of resurrecting the 20-year-old blockbuster to the third dimension was making nature seem real. The team worked hard to make the leaves, rain and other natural elements seem lifelike. The sound, too, was enhanced to be on level footing with the latest releases. The end result is that the cry of a Tyrannosaurus sounds real enough to send shivers down the spine of a full-grown human. The original film used a baby elephant.

“Titanic” (left) and “2012” were also converted for 3-D viewing as filmmakers look for more ways to profit from previous hits.

The animators did such a great job that in Australia, the rating for the 3-D version was taken up to M (not recommended for children under 15) even though the original was rated PG.

Spielberg said he had always imagined his masterpiece in 3-D, and just as he did with the first release, Spielberg showed his daring streak again with the new version. It takes a lot to think that a conversion done two decades later will be able to stand its own against contemporaries.

According to film critic Jason Bechervaise, there is a difference in movies that are produced as 3-D feature and those that are converted later.

“Movies like ‘Man of Steel’ or ‘Iron Man 3’ basically are shot in 2-D then in post-production they are converted into 3-D. When you go to watch these films, you get the impression that “OK it’s 3-D, but you don’t really feel the difference like in ‘Avatar,’ ‘Life of Pi’ or ‘Hugo,’ which were shot using 3-D cameras.” And it seems that average filmgoers feel it too.

Although increasing in number, 3-D films haven’t fared all that well according to a report compiled by the Korea Film Council. There were 49 films screened in 3-D last year, but only two hit the one-million mark. This year’s hit “Iron Man 3” exceeded the nine-million mark, 3-D and 4-D showings accounted for only 16 percent.

“It’s a basic concept if you think about it. Spray water in your face and you smell. ... It’s not rocket science. It’s just that extra gadget when you watch a movie,” Berchervaise said.

Slapping a 3-D tag onto a film doesn’t guarantee success, and this seems to be true especially for the Korean filmmakers who are just starting to play with the idea.

Take for example Bong Joon-ho’s “The Host,” one of the most successful Korean films of all time.

“They screened the 3-D version at the Busan International Film Festival in 2011. Certain things worked well, some didn’t. In terms of ratio as well, it didn’t quite work,” Bechervaise said.

The fate of Spielberg’s own 3-D feature will soon be revealed at the box office. The film opened yesterday in Korea.