Markets don’t get the Fed’s message

Markets don’t get the Fed’s message 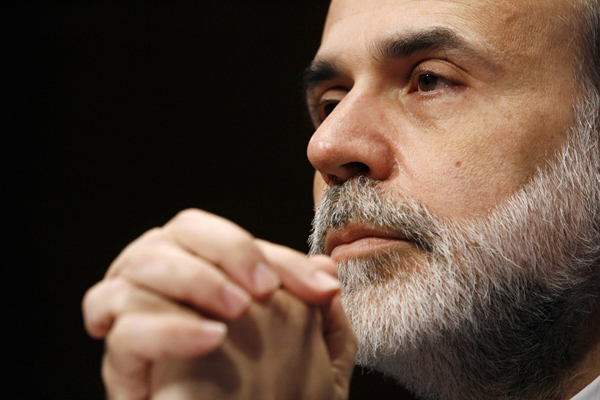 Try as he might, Federal Reserve Chairman Ben S. Bernanke can’t seem to get the market to understand the central bank’s plans. The problem might be less his communication skills than what he’s trying to communicate.

Since last week’s Fed meeting, at which Bernanke sought to clarify the central bank’s plans to decelerate the bond-buying program known as quantitative easing, investors have acted as if he signaled a major pullback in stimulus. A simple analysis suggests the market has overreacted.

The yield on the 10-year Treasury note, a standard measure of long-term interest rates, stood at about 2.6 percent on Monday, up 0.4 percentage point from where it was before last week’s Fed pronouncements.

It’s worth comparing this with previous market responses to monetary stimulus. Drawing on a dozen careful academic studies of quantitative easing, Goldman Sachs Group economist Jan Hatzius has estimated that it takes about $1 trillion in bond purchases to move long-term interest rates by 0.4 percentage point. In other words, the market’s recent reaction is roughly what would have occurred if the Fed had revealed a plan to cut back on quantitative easing by $1 trillion.

The Fed did no such thing. Bernanke said the central bank expects to start tapering its $85 billion a month in bond purchases toward the end of this year, with an eye to ceasing them altogether by the middle of next year - assuming the unemployment rate has fallen to about 7 percent. At most, he moved the tapering schedule forward by three months compared with what the market anticipated. That amounts to just $255 billion less quantitative easing.

So what spooked the market? The answer probably lies in the way the Fed has sought to distinguish its policy for quantitative easing from its policy for interest rates. When Bernanke set out the parameters for the former, he tried to emphasize that the latter had not changed. The Fed remained committed to keeping its short-term interest-rate target at or near zero until unemployment falls to 6.5 percent. The intended message: Interest rates will stay low until after the economy has recovered, so please feel confident to spend, invest and hire.

Investors, though, perceived the tapering of quantitative easing as a sign that the Fed would also start raising short-term interest rates sooner than previously thought. Prices in futures markets currently suggest a high probability that the target rate will rise to 0.25 percent by May 2014. Before last week, the rate increase wasn’t expected until much later in the year.

The market’s reaction means that the Fed’s extraordinary commitment to low interest rates in the future isn’t yielding the desired effect. Either investors don’t understand the Fed’s promise, or they fear that the Fed will renege as soon as the economic outlook improves.

To see why investors aren’t convinced, consider the Fed’s tortured logic. Fed officials are saying that the U.S. economy has two drivers - one in charge of quantitative easing, the other in charge of interest rates. The former is ready to tap on the brake (or, in Bernanke’s preferred language, to ease off the gas), while the latter is on cruise control. By the Fed’s view, we shouldn’t make inferences about one from the behavior of the other.

In reality, both drivers are in the same car, facing the same weather conditions and getting their instructions from the same Fed officials. Markets recognize this and have perceived a willingness to slow the car as a lack of commitment to stimulating economic growth. As we’ve learned, investors’ interpretations can have all-too-real consequences.

Central bankers are naturally conservative, so making a commitment to future policy feels somewhat radical. It’s also a strategy that can have a powerful effect if the public is convinced. My advice to Bernanke: Choose a single destination, turn on the cruise control, and make sure the markets know we have more than enough fuel to get there.

*The author, a professor of public policy and economics at the University of Michigan, is a nonresident senior fellow of the Brookings Institution and a Bloomberg View columnist.