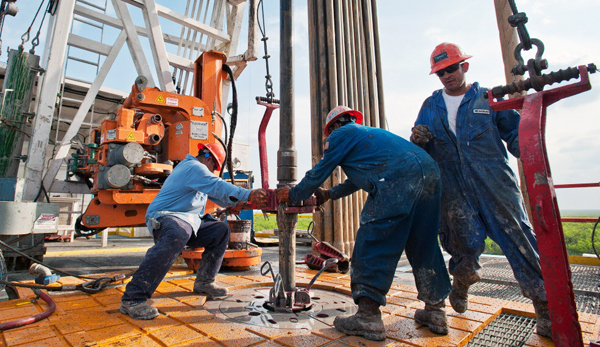 The shale revolution is threatening Russia’s global status. In 2009, drilling technology for unlocking gas and oil trapped in shale enabled the U.S. to overtake Russia as the largest producer of natural gas in the world. By 2020, thanks to shale oil extraction, the U.S. is expected to be the world’s top oil producer. This is damning news to Russia, which depends on energy exports to deliver half of its government revenue.

The shale revolution is making a noticeable dent. Russia’s gas and petroleum exports have been on a continuous downward trajectory since 2010 and the nation’s economic growth rate tumbled in the first half of 2012, as did its fiscal balance sheet. Accordingly, the government lowered its 2013 GDP growth rate outlook from 3.6 percent to 2.4 percent in April and is painstakingly seeking countermeasures.

In line with the continuous downward trend, Gazprom was forced to lower the prices at five of its subsidiaries in Germany, France, Italy, Slovakia and Austria by 10 percent at the beginning of 2012, and then in Poland by 16 percent in November. It also proposed a plan to replace the connection of gas prices to oil prices with a linkage to renewable energy sources. Gazprom is even positively reviewing the EU Commission’s demand that production and transport be managed by two separate companies.

The shale revolution has put the brakes on Russia’s Central Asian strategy to secure the Asian energy market. The U.S. production of shale oil (tight oil) and reduction of oil imports means that Middle Eastern oil producers have a surplus, which is finding its way to Asia. Furthermore, Korea has agreed to import 3.5 million tons of liquefied natural gas (LNG) from the U.S. annually over a 20-year period, starting from 2017 and from Japan a yearly 4.4 million tons.

As for China, it has the potential to become the world’s largest shale gas producer with reserves estimated to be larger than the U.S. There are plans to produce a yearly 60 to 80 billion cubic meters of shale gas from 2020. Consequently, as China’s long-time supplier, Russia has had to agree to the majority of China’s demands in recent purchase negotiations of crude oil and natural gas. Russia has also reopened the once deadlocked talks over territorial disputes and is trying to persuade Japan to join a $50 billion project to construct a LNG plant in Vladivostok.

Meanwhile, in order to contain North America’s newly attained energy leadership, the Organization of the Petroleum Exporting Countries (OPEC) and Gas Exporting Countries Forum (GECF) are planning to strengthen their alliance. Full-fledged efforts are being made to expand cooperation through such means as summit diplomacy with main oil sellers in the Middle East e.g. Saudi Arabia, the world’s largest oil producing nation, to control oil supply.

Through cooperation with its global partners in resource development, Russia is trying to keep the shale revolution in check. In building up camaraderie, Russia has already accumulated much needed experience from teaming up with Eni, an Italian energy company, France’s EDF and Germany’s BASF among others to oppose the EU’s regulations on constructing pipelines in Europe.

In order to maintain its supply leadership in the global energy market, Russia is aggressively spurring on the development of new mines in East Siberia and the Arctic Ocean and shale oil fields in West Siberia in response to President Vladimir Putin’s goal of ten million barrels of oil a day from now until 2020. Additionally, starting from October 2012-17, Russia will be developing gas fields in Chayandin as well as constructing a 3,200-kilometer (1,988-mile) pipeline to its planned LNG factory in Vladivostok.

The changing global energy market, where the exclusive supplier system is weakening and supply sources are diversifying, provides the opportunity to stabilize energy supply and demand, and prices. Korea imports 88 percent of its oil from the Middle East and only 3.6 percent from Russia. In order to lower its high dependency on the Middle East, Korea can actively take advantage of the export policies of shale oil-producing countries such as the U.S. and Australia and Russia’s Central Asian policy.

Also, an equal opening rule must be maintained towards all potential suppliers to establish the most beneficial position as a buyer. Additionally, in order to overcome China’s biased marketing, Russia is expected to strengthen cooperation with Korea and actively pursue deeper energy ties based on its development of energy in East Siberia and the Arctic Ocean.

*The author is research fellow at Samsung Economic Research Institute.