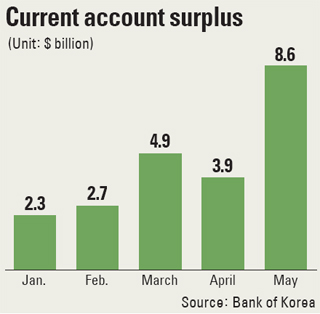 Things are looking up for the Korean economy as the current account surplus last month rewrote the record high set in November.

Unlike the past few months, the May surplus was largely due to a significant improvement in exports and a drop in imports.

The Bank of Korea attributed the decline on the import side to lower prices for raw materials rather than reduced domestic demand, and predicted that if the Korean economy stays its course a sizeable surplus would continue in June.

The BOK yesterday said the current account balance at the end of May stood at $8.64 billion, compared to the previous high of $6.91 billion.

While there has been a current account balance surplus for the past 16 months, last year it was caused largely by slower growth in imports and sagging exports against the backdrop of global economic uncertainty and a slower-than-expected recovery for major developed economies, especially the United States and in Europe.

Compared to a year ago, exports in May rose 7.4 percent to $45.9 billion, in large part because of a sharp increase in information and telecommunications devices like smartphones. Such exports surged 32 percent year-on-year. Computer chip exports were up 17.1 percent from a year ago, while automobiles and related parts jumped 8.3 percent.

On the other hand, exports of ships sank 34.6 percent year-on-year on weak global demand. Steel products were down 8.6 percent.

Exports to the United States saw the sharpest increase (21.6 percent) in May, followed by China (16 percent). Exports to the EU fell 14 percent and Japan 11.6 percent. Korean exports to the Middle East, which contributed to limited export growth last year, fell 13.4 percent.

As a result, the trade account surplus expanded sharply in May to $7.27 billion, up from $3.54 billion in April.

“The drop in the import account was largely because international raw material prices have fallen, rather than a reduction in volume,” said Kim Young-bae, who heads the economy statistics department at the central bank. We expect a similar surplus in June even if it does not reach the same level as in May.”

From January through May, the current account surplus was $22.5 billion compared to $7.9 billion for the same period last year.