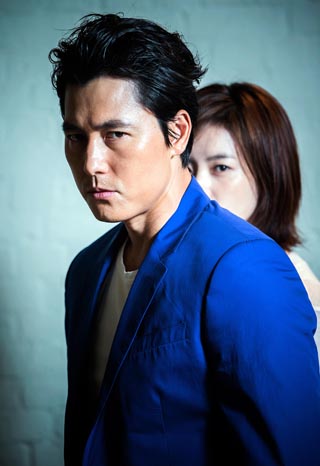 Actor Jung Woo-sung faced a challenge in the upcoming movie “Cold Eyes” for the first time in his nearly 20-year career: playing the bad guy.

In the movie, scheduled to be released Thursday, he plays a character named James, the leader of a criminal group.

“When I started reading the script for the movie, I felt that James would shift the seriousness of the film depending on who gets to play the character,” Jung said.

“When I said I would do it, everyone was really shocked.”

He met with the JoongAng Ilbo, an affiliate of the Korea JoongAng Daily, to talk more about his role as a criminal who never leaves a trace to avoid being tracked by special forces or local police.

Critics say Jung acts like himself in the first part of the film but becomes more like the character in the latter half.

Q. Did you intend to change yourself as an actor by taking a role you have never played before?

A. No, I actually had little interest in villain characters because I know that actors and movies have a great impact on young children. I thought that I didn’t need to do evil characters even though good characters can be boring. I chose to play a villain in this movie because I didn’t think that the evil was that serious.

Tell us more about the character you are playing.

We do not explain where James comes from and what kind of experiences he had in the past. We thought that it was right to leave this as mysterious as possible so that audiences could use their own imaginations.

The choice of weapon for James seems interesting in the movie. What’s the reason behind using a fountain pen?

It was to make the character colder and crueler. I also felt that James would be obsessively clean due to his job so I got a cleaner hairstyle.

What was the most difficult scene to film?

I didn’t have many action scenes, but I had to do one big fight. James was supposed to be a stylish villain, so I had to try hard not to show an untidy attitude even during fights, and that was hard.

Also, there was a high-profile action scene to be filmed in Seosomun-dong [in central Seoul], and I was very nervous about watching stunt actors working. I usually watch the scenes that look dangerous even though I’m not supposed to be in them. It is a responsibility I have as a lead character, and it is something I ought to do as a senior actor. Fortunately, there was no big accident.

Your job as an actor gets you a lot of attention. Do you feel like you are under surveillance like your character?

Actually I feel more tired than James. James only needs to avoid being caught on security cameras, but I cannot possibly avoid all the cell phone cameras people [on the streets] have. But I think I need to endure because I can’t have it all. I look at it as getting some attention rather than being under surveillance.

What do you want to do before you get older?

I want to play a character in a romantic comedy such as “Pretty Woman” (1990). And I also have some ambitions about directing. Maybe it is because I started as a movie star, but I’m delighted all the time while preparing for a movie, filming it and promoting it after release. I’m currently thinking about [producing] a melodrama with some action scenes. I want to make a movie that represents Jung Woo-sung.