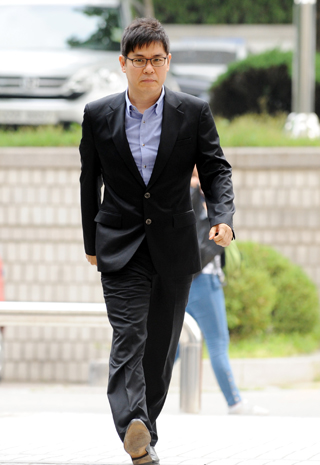 Comedian and TV program host Kim Yong-man has been ordered to serve eight-months in jail and two years of probation for illegal sports gambling, according to the Seoul Central District Court yesterday.

The punishment is lighter than that requested by the local prosecutors’ office as it originally asked for a one-year jail term.

“His sin of habitual gambling is grave because he is a public figure,” the court said. “However, we also considered that it is his first time [accused of such actions] and he has contributed much through volunteer work and donations.”

After the trial, Kim told reporters that he would accept the punishment ordered by the court and will not appeal to the decision.

“I will try to look at things [in a broader way] instead of looking at only one aspect of life,” he added. “To the people who encourage me by showing love, I will pay them back by living the right [life].”

He added that he doesn’t have plans to come back to the entertainment scene anytime soon.

He was indicted in April for habitually gambling from 2008 to 2011 and admitted all charges against him in the first hearing in May.

Kim’s legal representative is said to have requested the court consider the fact that Kim never planned on serious gambling but was just curious. The lawyer also argued that he never earned a lot of money and quit voluntarily about two years ago.