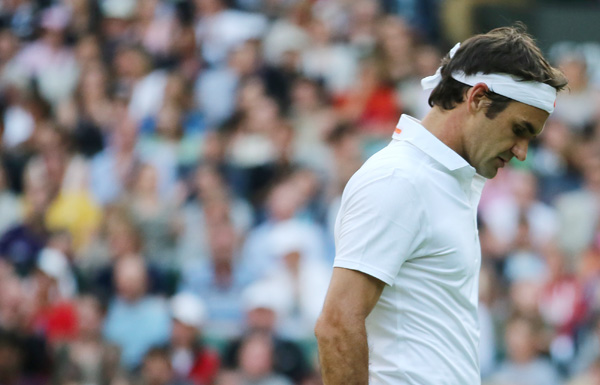 Roger Federer of Switzerland reacts during his second-round match against Sergiy Stakhovsky of Ukraine at Wimbledon in London on Wednesday. Federer lost in four sets, his earliest Grand Slam exit in a decade. [XINHUA/NEWSIS]

LONDON - Never has a routine, straight-sets victory been so remarkable.

Britain’s Andy Murray brought a small sense of order to Wacky Wednesday at Wimbledon. In a day of stunning upsets, ill-timed injuries and slips on the grass, his match was ordinary, his scoreline routine.

His 6-3, 6-3, 7-5 victory over Yen-hsun Lu of Taiwan was notable only for not being notable - one of the rare times that could be said on a day when Roger Federer and Maria Sharapova lost, Jo-Wilfred Tsonga quit, Victoria Azarenka didn’t even start and five more players, including the man who beat Rafael Nadal earlier in the week, also went out with injuries.

“You have to concentrate on yourself,” Britain’s top player said. “I think when a lot of players get injured, the one thing is, you may be a little tentative yourself at the beginning of the matches, maybe not feel that comfortable throwing yourself around the court. But after the first few games, that normally goes away.” The second-seeded Murray served 11 aces and hit 41 winners to only 14 unforced errors during his 2 hours, 1 minute on Court 1, the same court where Azarenka slipped during her match Monday, twisted her knee and, as it turns out, hit her last shot of Wimbledon 2013.

“The court was not in a very good condition that day,” Azarenka said after announcing she’d withdrawn.

Murray, however, reported no issues with his footing.

“I felt fine in my matches, to be honest,” he said.

He is seeking to become the first British man to win his country’s Grand Slam tournament since 1936. All by itself, that makes every appearance of his at Wimbledon a pressure-packed, headline-producing affair throughout London.

Given the way the draw is opening up, Murray should expect more of the same over the next 11 days - or however long he lasts in the draw.

“I don’t know what will be written,” he said. “But I just have to take care of what’s going on on my side of the court, practice well, prepare well for the matches, try and concentrate on each one at a time. I’ve done a good job of that the last few years.”

It helped him get the Olympic gold medal last year, captured here at the All England Club. He followed that by winning his first Grand Slam trophy at the U.S. Open.

When the draw first came out, Murray was looking at a possible matchup against third-seeded Federer or fifth-seeded Nadal in the semifinals en route to a possible second straight final. On the other side of the draw stood top-seeded Novak Djokovic, with none of the sport’s Big Four in his way.

Nadal was gone Monday. Now, Federer is gone, too.

Federer, the seven-time Wimbledon champion and 17-time Grand Slam champ, shuffled off Centre Court with dusk approaching on the fortnight’s first Wednesday, his head bowed, his streak of reaching at least the quarterfinals at a record 36 consecutive major tournaments snapped by a man ranked 116th.