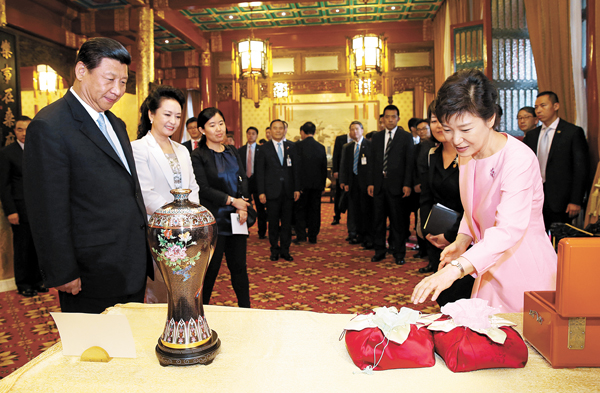 President Park Geun-hye, right, and Chinese leader Xi Jinping exchange gifts yesterday at the Diaoyutai State Guesthouse in Beijing, marking the meeting of the two leaders during Park’s state visit to China. Park received calligraphy containing a message of mutual development between the two countries and poetry while Xi was given a traditional red lacquer chest and a tea set. [Joint Press Corps]

According to the Blue House, it was rare for China to offer a special event in addition to the scheduled itinerary of a state visitor.

“It is the first time for a South Korean president to receive such hospitality,” Kim Haing, Park’s spokeswoman, said.

Before departing for China, the Blue House promoted that Park’s four-day state visit aimed to deepen the two countries’ ties. The presidential office titled the trip “A Journey of Hearts and Trust,” stressing the importance of bonding and friendship in Chinese culture.

Park had a summit with Xi and attended a state dinner on Thursday. Yesterday, Park and Xi had about a two-hour-long meeting, having candid exchanges on various issues concerning the two countries and the region, the Blue House said.

“In addition to Thursday’s schedule and the special luncheon, the two leaders spent almost seven hours together in total to deepen their friendship and trust,” said a Blue House official.

“The two leaders had candid discussions on their ideas to add substances to the partnership of the two countries,” Kim said. “They also exchanged frank opinions on the future possibility taking into account changes on the Korean Peninsula as well as cooperative efforts for prosperity of the region.”

“I am optimistic about President Park’s Korea Peninsula trust-building process,” Xi was quoted as saying at the luncheon by Ju. “China will support South Korea’s implementation of the process to resolve the inter-Korean issues, maintain close cooperation between South Korea and China for peace on the peninsula and realize the vision for Northeast Asia’s peace and cooperation.”

Following the luncheon, Park gave a tea set and a red lacquer chest to Xi as present. Xi gave Park a calligraphy work and a cloissone vase. The calligraphy was part of the famous poem entitled “On the Stork Tower” by Wang Zhihuan. The Blue House said the gift illustrated China’s hope to upgrade the two countries’ relationship for the future.

China’s special treatment of Park was evident throughout her stay in Beijing.

At the state dinner, China played a Korean song that was used for Park’s campaign. Another Korean song, “Spring in My Hometown,” was also sung by a group of Chinese students. The song was a favorite piece of Park’s late mother.

Calling her an old friend of the Chinese people, Xi hosted the dinner at the largest and most luxurious banquet room of the Great Hall of the People. The dinner had about 150 guests.

For the state dinner, Park dressed in a golden-colored hanbok, or traditional Korean garment. She was also dressed in a yellow jacket for her welcome ceremony. Red and gold are the Chinese people’s favorite colors and Kim said the wardrobe of the president was chosen to express Korea’s respect for Chinese culture.

Following the special luncheon with Xi yesterday, Park also met with other power elites of Beijing. She met with Zhang Dejiang, chairman of the Standing Committee of the National People’s Congress, and also had a meeting and dinner with Premier Li Keqiang.

Today, Park will give a speech at Tsinghua University and leave for Xi’an, a historic city in the west.

Park will be the first South Korean president to visit the city with thousands years of history, but many influential foreign leaders have included Xi’an as a destination in their China trip. North Korea’s late founder Kim Il Sung also visited the city during his 1982 China visit and received an enthusiastic welcome.