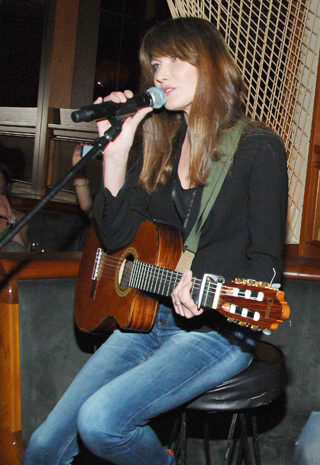 NEW YORK - Gone are the prim (but stylish) Dior suits and sheath dresses worn by the first lady of France. Carla Bruni is back in pop star mode, in a uniform of skinny jeans and cute little boots, toting a guitar.

The singer, who’s been promoting her new album, “Little French Songs,” in New York this week and excitedly announcing her first U.S. tour, said she’s happy about her return to her former life ? though she insists, “I never really left it, you know?”

But Bruni, who left the Elysee Palace in Paris with the electoral defeat of her husband, President Nicolas Sarkozy, in 2012, is still political enough not to rule anything out. Namely, another Sarkozy presidential run - an eventuality being discussed in France by opponents of current President Francois Hollande.

“Well,” she said carefully about that possibility. “It’s not current. You know? I don’t think we can really talk about it today ... We go on with our life.”

“Politics are a special world with special rules,” she adds. “And so, they talk about it, but it’s just to fill up the press a little bit, you know?”

In an interview in a New York hotel room, Bruni prefers to talk about her album - it came out here in April, but an earlier promotional trip was canceled due to illness - and her just-announced U.S. tour early next year.

“It’s fantastic! I never did a tour in the United States, I never even toured in Europe,” she said. “I hope people will come. For a French artist or Italian artist, it’s really rare and it’s lucky.”

Bruni is aware that few people can look at her solely as a musician, but rather as a woman with a fascinating trajectory: an Italian-born supermodel turned songstress, famous for dalliances with Mick Jagger and Eric Clapton, who later engaged in a whirlwind courtship and marriage to the French president.

She said all that doesn’t bother her.

“What bothers me would be indifference,” she said. “There’s plenty of talented people, geniuses everywhere that have no chance to talk about their work, to show their work. So I don’t really suffer from getting attention.”

Much attention has indeed been paid to Bruni’s marriage - with the snarkiest commentary speculating on how long it would last, past Sarkozy’s presidency. But Bruni speaks freely and frequently in the interview of how much she loves her husband, whom she calls “my man.” She also calls him “Raymond” - in a song on her album, called “Mon Raymond.”

“It’s a love song so obviously it’s about my husband,” Bruni said about the number, which playfully likens her man to a pirate, albeit in a necktie. “But you only get it if you listen to it. So of course some of the media (don’t get it) and I understand that.”

Along with jump-starting her singing career, Bruni, 45, has also been returning to modeling - she is a new face for Bulgari. And she’s a new mother again, with an 18-month old daughter, Giulia, at home, joining her 12-year-old son, Aurelien, from a previous relationship. (Her husband has three other children, two of them adults, from his first two marriages.)

“Motherhood is just like the most incredible, difficult thing,” she said. “Wonderful and difficult at the same time. You’re always wondering if you’re doing it right. But probably of course it’s the biggest joy I ever had.”

She speaks of her time as first lady almost as if it were a strange dream.

“I guess I was a little naive,” she said. “I just fell in love with him and we got married, and poof! But what surprised me the most was I could really use that position for helping other people, and that was great. Also what was great was to meet some people that are exceptional, to me.

“Maybe one of the most incredible moments for me was when we went to South Africa and we met Nelson Mandela,” she said of the 94-year-old anti-apartheid leader and former president, lying critically ill now in a Pretoria hospital. “It was so moving to meet him, so kind, so gentle ... it was a great moment.”

And how about Barack and Michelle Obama? Bruni calls the couple “very, very kind people and very simple people. She is very kind and very relaxed and very normal so that’s how I felt about meeting them. At that level of power, being the president of the United States and being a really nice human being - it’s good.”