Next time, patience and dexterity

Next time, patience and dexterity 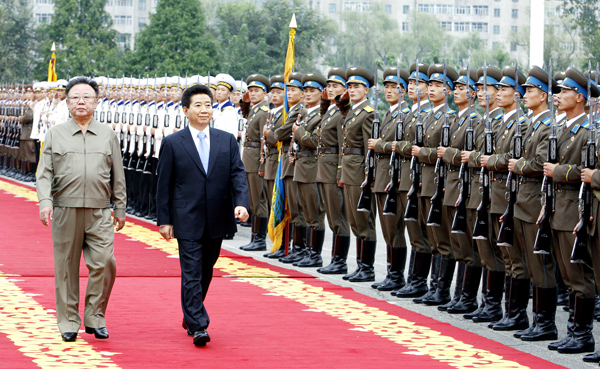 There was a certain pattern in the flow of one-on-one dialogue between leaders Roh Moo-hyun and Kim Jong-il during their 2007 summit in Pyongyang.

Roh was aggressive and passionate, making various suggestions to create new peace arrangements between the two Koreas, while Kim remained passive and unenthusiastic.

Minutes and texts were disclosed by the National Intelligence Service recently to clarify allegations that the late South Korean president made concessions concerning the Northern Limit Line, the de facto maritime border in the Yellow Sea since the end of the Korean War in 1953. During an early tete-a-tete, Roh explained in detail how Seoul envisioned settling the conflict over the NLL by creating a joint fisheries and sea peace zone. Toward the end of the conversation, Roh said he wanted to expand on the plan to develop the West Sea and coastal region on both sides of the border. Kim responded that he would suggest including the issue on the agenda in ministerial-level military talks, and the joint statement said it had been discussed in positive way.

When Roh asked that they meet again in the afternoon to discuss the matter further, Kim implied that the visiting South Korean president’s afternoon schedule was already full. “And what is there more to discuss? Haven’t we already covered the basic grounds?” he said, indicating he did not wish to push the topic further. Roh, however, insisted on another meeting in the afternoon and Kim finally gave in, saying, “I will agree since you are so persistent”

The kowtowing ambience may come from Roh’s sense of urgency and impatience toward the end of his term in office. The inter-Korean summit was hastily arranged with just five months left in the South Korean president’s five-year tenure. The minutes suggest that Roh, who had been eager since taking office for an inter-Korean summit and finally became the second president to sit across a North Korean leader, seven years after his predecessor Kim Dae-jung. He also might have been over-enthusiastic to return home with a landmark deal that could match the first summit. He frankly told his North Korean counterpart that he had waited five years for this meeting and that had he prepared hard for the summit because there might not be another chance.

Roh’s keenness might also have been played up by North Korea’s cunning bargaining skills. According to a senior government official at the unification ministry, Pyongyang tantalized Seoul about an inter-Korean summit until they finally agreed to the October 2007 meeting. Kim Yang-gon, director of the United Front Department of North Korea’s Workers’ Party, when he visited late September to arrange the inter-Korean summit, suggested the meeting be informal and friendly, instead of aiming to reach a formal agreement. Confounded South Korean officials considered it to be a joke.

But when the South Korean delegation arrived Oct. 2 in Pyongyang, they discovered it was no joke. South Koreans handed over a draft agenda and agreement the two leaders could discuss in their meeting the next day. Kim, who had been in Seoul earlier, scurried to the hotel where the South Korean visitors were staying and protested the formalities, claiming he had made it clear on the purpose of the inter-Korean summit meeting. Roh annoyingly murmured he was not there to take photos when he heard Pyongyang’s response.

North Korea’s unwillingness may have prompted the late president to act somewhat against the interests and general sentiment of South Koreans. Declassification of the documentation of the inter-Korean meeting should teach Seoul a few things about its behavior and strategy in future inter-Korean talks. One crucial aspect of North Korean bargaining is that no one can question the absolute leader’s negotiating style. He can bargain or not all he likes. But this would be impossible in the South Korean democracy. Still, the records show South Koreans cannot get anything from North Koreans if they are too anxious to achieve something.

North Koreans might have played intentionally unenthusiastic to study how far South Koreans can go when agreement is reached. Then-ruling Democratic Party members explain Roh had not given in, but had worked hard to persuade North Koreans. But we might have seen different results if leaders had played with more ease and dexterity.

* The author is a senior fellow of the JoongAng Ilbo Unification Research Institute.