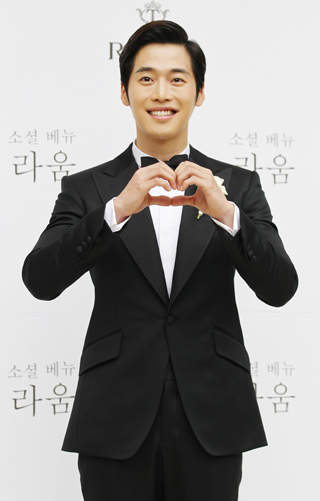 Actor Kim Jae-won of the MBC drama “May Queen” married his girlfriend of eight months on Friday at a wedding hall named Raum in Yeoksam-dong, southern Seoul.

Before the 6 p.m. ceremony, the groom met with reporters to share his excitement over the wedding.

“As the wedding has approached, I truly feel why people should have a family of their own and why they should get married,” said Kim, adding that he feels safe and secure. “I’m delighted and happy.”

He also said that he will provide the best love to the child his pregnant bride is carrying. They have decided to call the baby “heaven” until the birth. They do not know the baby’s gender.

The couple have been friends since they grew up in the same neighborhood when they were young. They started developing romantic feelings toward each other in October. Their parents met in February to plan the wedding.

The couple will live in Kim’s home in Bundang, Gyeonggi, and the honeymoon is delayed until next year as Kim is filming for the drama, “Scandal.”