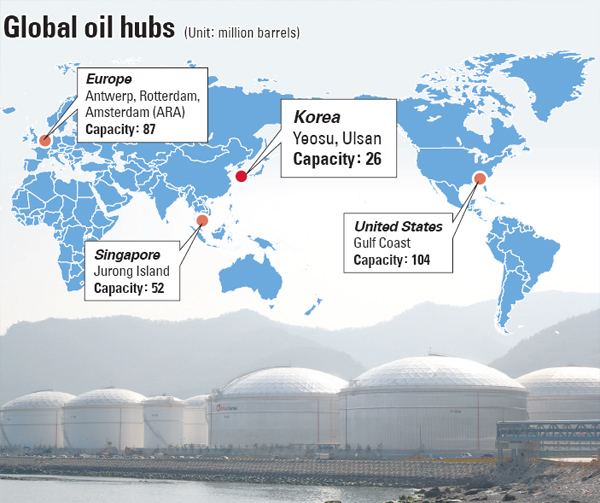 The oil-storage complex at Yeosu, South Jeolla, is the world’s fourth-largest. Provided by the company

YEOSU, South Jeolla - As many as 36 domed oil tanks shone under the bright June sun on a tip of Korea’s southernmost coastline in Yeosu. The aluminum-covered domes looked even more luminous surrounded by thick forests and dark blue water.

“The domes are shining because of aluminum. Korea has completed the world’s first aluminum-topped oil tanks that protect oil from rain and from evaporation,” said Lee Yoo-kil, executive vice president of Oilhub Korea Yeosu, operator of the tanks. “Singapore is also starting to use aluminum to cover the heads of oil tanks on Jurong Island, the newest construction method developed by our company.

“Our clients don’t need to worry about the quality of their oil once they decide to store it here.”

Korea has created the world’s fourth-largest oil storage complex in Yeosu with an aim to become a hub for Northeast Asia.

Although the total capacity is smaller than that of competitors in Singapore, the United States and Europe, Korea plans to construct two more complexes in Ulsan, North Gyeongsang, by 2020. One will have a storage capacity of 9.9 million barrels of oil and the other 18.5 million barrels.

Creating an oil hub in the country, an idea that originated in the last administration, has been included as one of the 140 goals of the Park Geun-hye government.

Korea wants to beat Singapore’s 52 million barrel tanks that currently serve as the center of oil transactions in Southeast Asia.

Yeosu, South Jeolla, home to refiners and their contractors, has geographical advantages, including 20-meter-deep water and sophisticated port facilities.

At a 3.4-kilometer (2.1-mile) wharf that connects to oil tanks with pipes, there are four jetties where large tankers can load or offload at the same time. Jetty 3, the largest, can accommodate a 200,000-ton-class very large crude carrier (VLCC). Later, it will be expanded to 320,000 tons.

Because of their proximity to 336-meter (1,102-foot) Mount Jeseok, the tanks are sheltered from the wind.

And since Korea’s leading refineries are nearby, it will be easy for traders to do business.

“It is much faster to carry oil from here to Beijing than from Singapore, so making Yeosu an oil hub is very important to the Northeast Asian market,” said Baik Moon-hyun, CEO of Oilhub Korea Yeosu. “Our target regions will stretch to Russia and North America.”

According to Baik, China lacks such storage facilities despite its growing appetite for oil, while Japan refrains from building them due to earthquake risks.

Oilhub Korea Yeosu, operator of the tanks, is a joint venture of Korea National Oil Corporation with a 29 percent stake and China Aviation Oil with a 26 percent stake.

Currently, 80 percent of the tanks are operating. GS Caltex, SK Energy, KNOC, and a foreign company that declined to be named, are using the facilities. CEO Baik forecast the operation rate could reach 100 percent by the end of the year.

“Our tanks have been inspected for safety by BP, and we received a positive assessment,” Baik said. As part of efforts to attract global oil traders, the company recently signed a deal with a Singapore-based American trader to use Yeosu.

As demand for oil increases in China along with its rising economy, the Northeast Asian region will see a growing amount transported to the country, the government predicts. Oil transactions jumped from $5 billion in 2011 to $12.9 billion in 2012. As of 2011, the region consumed 19 percent of the world’s total oil consumption.

Singapore handled about 18 percent of the oil trade to Northeast Asia until 2006, but the figure has dropped to 9 percent.